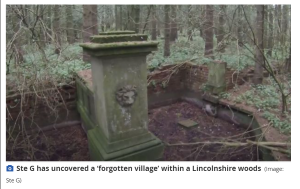 An urban explorer has uncovered a ‘forgotten village’ within a Lincolnshire woods, the Grimsby Telegraph has reported.

…not revealed its exact location to protect it from possible vandals…

…apparently two houses, a manor house and a church…

Steve Gray, from Grimsby, ventured into woodlands near Louth where he came across the homes.

He has not revealed its exact location to protect it from possible vandals.

Steve has uploaded a 10-minute video of his exploration onto his growing YouTube channel – Ste G.

He said: ‘There’s an apparent lost, forgotten village in some woods… There’s apparently two houses, a manor house and a church.’

On closer inspection, Steve said it looks more like a ‘couple of houses’ than a village – but says it was a ‘good explore’ nonetheless….

He enters two of the buildings and discovers old kettles, drink bottles and glass jars sat on shelving inside.