IHBC features ‘Heritage from the (global) doorstep’: Manchester prepares for fall of its ‘Berlin Wall’ 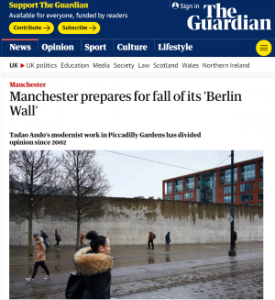 An assertively modernist work in Manchester’s Piccadilly Gardens has divided opinion since 2002, and now The Guardian reports that work is set to begin on the demolition of the Japanese architect Tadao Ando’s only UK work, after sceptics won the battle over what has been called the Mancunian Berlin Wall.

…the council announced a change of heart, saying it would in fact knock down the free-standing element…

To some it is a modernist masterpiece for which “any other city in the world would give their right arm”. To others, it is a concrete carbuncle that should never have been installed on what was once Manchester’s lushest square.

Work was set to begin on Monday to demolish the Japanese architect Tadao Ando’s only UK work after sceptics won the battle over what has been called the Mancunian Berlin Wall.

…. part of plans to revamp Manchester after the 1996 IRA bomb attack on the city, Ando’s concrete monolith immediately divided opinion.

…. the structure offended the mainstream aesthetic. For every architecture student who worshipped the clean lines of Japanese minimalism, there were many members of the public who complained the structure was an eyesore that provided too much camouflage for drug dealers lurking in its shadows…..

In 2014, the Manchester Evening News launched a campaign to get rid of the wall, after three-quarters of its readers said they hated it….

That year, the council announced plans to disguise it with greenery, saying it would be too expensive to demolish. There were also complications over its ownership, with part of the structure – a pavilion containing a restaurant – being in private hands.

But earlier this year the council announced a change of heart, saying it would in fact knock down the free-standing element of Ando’s work.

Councillor Pat Karney, the city centre spokesperson, was so pleased he said he would be marking the demolition date in his diary….

Preparatory works were set to begin on Monday, with work to dismantle the wall starting only later this week, a council spokesman said. As the structure is right next to the tram line, work will take place between 1am and 5am when the Metrolink is not running. It will take several weeks, as the wall was built on top of various key utilities that will need to be carefully bypassed.

“Ideas for the wider improvement scheme are being developed and will be shared with the public and businesses to gauge their views towards the end of the year,” the council said ….

Eddy Rhead, from the Modernist Society, a group that champions 20th-century architecture, said: “There are fundamental problems with Piccadilly Gardens and they won’t be solved by knocking down the wall….

“Anybody who knows anything about modern architecture knows Tadao Ando is a world-class architect. Any other city in the world would give their right arm for a piece of Ando architecture.”