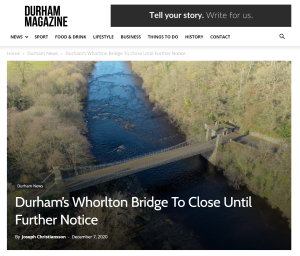 A historic County Durham bridge – Grade II, Scheduled, the UK’s oldest road suspension bridge and the earliest surviving structure using an iron chained suspension bridge – is due to close after a condition assessment found it is no longer able to support pedestrians, writes the Durham Magazine.

Whorlton Bridge, near Barnard Castle, will be closed to all users from Saturday 5 December until further notice.

Originally designed only to carry horse-drawn traffic working on the Durham Coalfields, in 1985 a restriction was put in place limiting the bridge to one vehicle at a time.

The bridge has provided an efficient link for local residents in Whorlton and those visiting the area. Major repairs were made in 1993 and 2003 while anti-slip decking was added in 2008 and minor maintenance carried out in 2017.

Since closing the bridge to vehicles in August 2019, a diversion has been in place and specialist independent engineers have undertaken detailed inspections to determine its current condition and assess its load-carrying capacity.

Although the bridge has remained open for pedestrians and cyclists, an assessment has shown that the bridge is no longer able to support pedestrians and the identification of a hanger failure, which resulted in the closure of access to vehicles last year, appears to not be an isolated issue with the condition of other hangers deteriorating.

Public safety has always been a priority…

Alan Patrickson, Durham County Council’s corporate director for neighbourhoods and climate change, said: “As Whorlton Bridge is a Grade II-listed structure and a Scheduled Monument, we will now work very closely with conservation teams and seek permission and support from Historic England and the Environment Agency before progressing with any works.

“Further testing plans and proposals will be developed…”

For further information and the latest updates on Whorlton Bridge, please visit www.durham.gov.uk/whorltonbridge