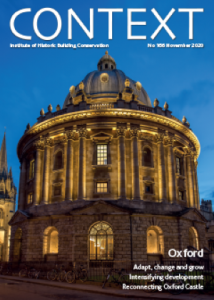 The latest issue (no. 166) of the IHBC’s membership journal Context is now out, with historic firsts including a new approach that focusses on the future of an historic city – Oxford – and boasts an introduction by Layla Moran MP, Chair of the new APPG on Conservation, People and Places, (CPP APPG) which has the IHBC as its Secretariat and has also launched its first Inquiry Call.

…Oxford as a regional centre with a local focus…

…How to deal with contested heritage …

Layla Moran writes: ‘… Context … explores Oxford as a regional centre with a local focus. But with its global profile, it is not surprising that what happens here reverberates around the world. How to deal with contested heritage has been at the forefront of our minds in Oxford as we have grappled with the flashpoint issue of removing the statue of Cecil Rhodes from Oriel College.’

Detailed case studies across the issue provide diverse food for thought on the Oxford theme – including other IHBC links to the city, such as, Malcolm Airs, past-Chair and more, on the voluntary sector and planning there, and past-vice chair Emilia McDonald on ‘Maintaining the buildings of Oxford University’.

As ever, content is complemented by the usual regular features such as book reviews, reports from the IHBC Chair and Director and much more.

… co-founder of the IHBC as a professional body and charity, David Lovie…

This historic issue also includes an obituary of the co-founder of the IHBC as a professional body and charity, David Lovie, by the Chair of his own North Branch, Jules Brown, and an article by Rebecca Burrows, heritage consultant and associate at Purcell about the potential implications of England’s 2020 White paper, Planning for the Future.

Articles in Issue 166 (Oxford) include:

See more background from the IHBC on the CPP APPG

As ever, themed issues of Context also include more general conservation articles as well as news and reports from IHBC’s officers.