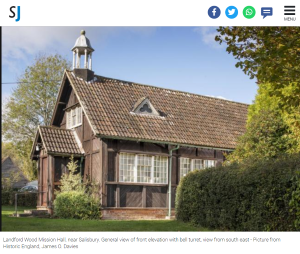 A hall built in 1899 for the spiritual wellbeing of the local community has been granted heritage protection, The Salisbury Journal reports.

…[funded] … for the spiritual support of the rural community…

… reflects her love of the arts, evident in the hall’s distinctive style….

According to Historic England, Landford Wood Mission Hall, near Salisbury, was created for the Landford Wood Society and was funded by Scottish philanthropist and art collector Louisa Baring – Lady Ashburton – for the spiritual support of the rural community based around the Melchet Court Estate.

The Landford Wood Society was founded in 1889, which originally met and worshipped at Landford Wood Farm. The mission hall was constructed ten years later by local builders at the expense of, and on land belonging to, Lady Ashburton.

It was designed by surveyors Rawlence and Squarey of Salisbury, and built by Reuben Moody of Landford.

The hall, which had cost around £300, was recently granted Grade II listed status ….

This means Landford Wood Mission Hall is protected from being demolished or altered without special permission.

The site was given this status due to its architectural interest, historic interest and its group value, as it stands with the nearby Grade II-listed lodges and gates and Landford Wood House.

Describing the architecture of the build, Historic England says the hall has “a highly distinctive timber construction, where the deployment of materials and method of assembly are of considerable aesthetic appeal, combining rusticity, geometry and eclectic details”, and “a simple yet striking interior, with an unusual hammer beam roof structure of high-quality construction”.

The Landford Wood Mission hall is one of a number of buildings with a Christian or social welfare function that Lady Ashburton commissioned in her later years….

“The building Lady Ashburton commissioned for her own estate at Melchet makes a strong statement about her commitment to spiritual welfare and reflects her love of the arts, evident in the hall’s distinctive style….