IHBC’s HESPR ‘Special Interest Sector News’ pick of the week: Archdaily on ‘9 Cities with Medieval Plans Seen from Above’ 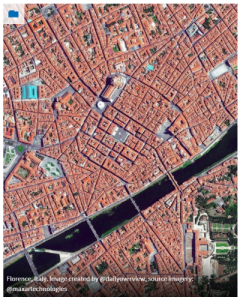 … the medieval city appeared at the beginning of the 11th century…

… cities were planned in an almost intuitive radioconcentric form…

In his book Breve Historia del Urbanismo (Brief History of Urbanism), Fernando Chueca Goitia states that the medieval city appeared at the beginning of the 11th century and flourished only between the 12th and 13th centuries. According to the author, this growth was closely linked to the development of commerce that allowed permanent occupations, resulting in a city no longer composed mainly of travelers. In other words, the bourgeoisie was formed thanks to the most diverse activities – craftsmen, tradesmen, blacksmiths, longshoremen – which stimulated the development of the medieval city….

The rise of the medieval city is not only related to the economy but also its geographical surroundings… ancient cities needed other defense mechanisms besides the construction of walls. For this reason, they often developed in places that were difficult to approach….

Most of the time, the cities were planned in an almost intuitive radioconcentric form, in which the main streets depart from the center – from important urban amenities – following to the gates, and are intersected by concentric smaller and secondary roads.

However … it is also possible to observe a great variety of plans that differ from this conception of the typical medieval town, which includes linear schemes, cross-shaped cities, radio centric cities, fishbone-like plans, acropolis cities, among others.

Anyhow, regardless of the urban plan, medieval cities were relatively small, allowing for specific forms of sociability that favored gathering and interaction in public spaces, mainly because of commerce….

Almost ten centuries have passed since the first medieval urban formations, and some cities still bear the scars of this very specific period until today. Many of them have already incorporated the urban layout in such a way that it becomes very hard to perceive the overlapping of times, but if one looks closely enough, it is still possible to make out the different layers. For this reason, we have selected nine examples of cities that have lived through the Middle Ages and that still contain nuances of this urban planning.

To find out more on HESPR see our ’Find Services’ or explore our ‘Join HESPR’ sections.

For a free promotion of your tendering opportunities and work needs to the IHBC’s HESPR members, please send details and links to Joanna at contact@ihbc.org.uk, as soon as possible.

Tenders can also be advertised for a fee with IHBC Jobs etc, including a targeted email to 2000+ recipients as well as full coverage on our NewsBlog alerts and social platforms (membership and followers c.18,000) and websites with c. 290,000 visits a month. Contact Joanna at contact@ihbc.org.uk