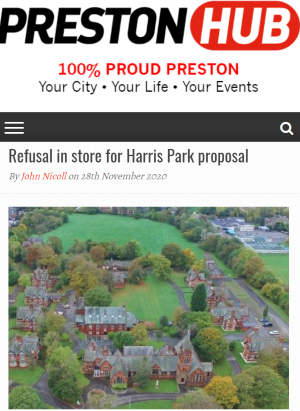 Eden Grove is a company headed by local property developer Yousuf Bhailok, who bought the 15.3-acre Fulwood site in 2006 and sought to sell it through Cushman & Wakefield in 2018.

The site, opened as an orphanage in the 1880s, was bought by the then-Preston Polytechnic in 1985 and used for student accommodation; when the polytechnic became the University of Central Lancashire in 2000 it converted the site into Harris Knowledge Park.

The whole park is listed and classified as a Conservation Area, while a number of the houses and structures within it are listed individually.

Working with Cassidy + Ashton, which had previously secured listing building consent for works at a the location, Eden Grove has put forward a hybrid application.

The application broadly breaks down as seeking full consent for eight new houses in the eastern part of the site; along with nine apartments and three townhouses within Clayton Hall and the Harris Conference Centre; along with new dwellings across several converted listed buildings. ….

….In all, the scheme would result in 66 new build dwellings and 21 further homes.

….Officers said: “The proposed development would be contrary to the hierarchy of locations for focussing growth and investment at urban, brownfield and allocated sites, within key service centres and other defined places.

“It fails to accord with the management of growth and investment set out in Policy 1 of the Central Lancashire Core Strategy and consequently it would lead to the unplanned expansion of a rural village.” Preston has put great store in its city living strategy in recent years….