IHBC features ‘Heritage from the doorstep’: Excelsior – The tunnel near Plymouth with a nuclear secret 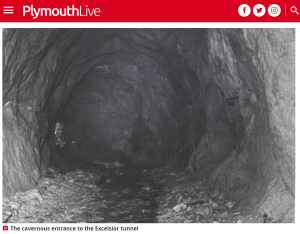 For years, there have been rumours whispered around Plymouth and Cornwall about so-called ‘nuclear tunnels’ that exist beneath the Tamar Valley, reports The Plymouth Herald.

…no reason to suppose they could not, work towards the firing of one ton charges…

A mere 16 miles from Plymouth, hosting astonishing views across the Tamar Valley, Kit Hill has become a famous landmark – but it has a big secret.

For decades now, rumours have been whispered around Plymouth and Cornwall about so-called ‘nuclear tunnels’ that exist beneath the Tamar Valley.

Legend has it that Cold War nuclear testing went on at the now-infamous Kit Hill – in a mysterious natural bunker named Excelsior Tunnel.

The deep cavernous granite chambers, near Callington, were said to have housed top secret testing.

This is because of a discovery that it could be possible to camouflage the seismic signal from the detonation of an underground explosion so that it could either be missed altogether or made to appear many times smaller than it actually was – meaning nuclear weapons testing could go ahead, somewhat undetected.

By the late 1950s, both Russia and the West had built a huge arsenal of nuclear weapons, at great cost, and there were discussions going on at the time which sought to ban the testing of such weapons.

But then, a theory would send scientists and politicians spiralling into a dangerous tailspin which, amid greater fear and mistrust, could have lead to catastrophic nuclear conflict.

Completely incognito, that global conflict suddenly came very close to home – to the nearby Kit Hill, which provides panoramic views across Plymouth, to the Eddystone lighthouse.

The beautiful and untamed landscape of Kit Hill – around 1,000ft above sea level – and its infamous panoramic views of the Tamar Valley somewhat contradict its long, industrial history….

Why was Excelsior Tunnel chosen?

Exactly why the Excelsior Tunnel in Kit Hill was chosen is not clear, although the report details its dimensions in great depth.

In Devon, they looked at the Vitifer, Golden Dagger and Birch Tor mines, near Chagford.

Whilst across the border, in Cornwall, they considered nine mines from Penzance to Callington.

The report states: “Provided the political and legal problems could be sorted out, and there seems no reason to suppose they could not, work towards the firing of one ton charges could commence without delay in any or all of the following three mines, listed in order of preference – Tolgarrick (near St Austell), Wheal Bray (on Bodmin Moor) and Wheal Speed (Near Penzance).”

Seventy five controlled explosions were carried out over a period of several months.

No nuclear material was involved. That was largely the end of the matter in Cornwall and the project – known as Operation Orpheus – moved on to Cumbria.

At the Greenside Mine 3,000lb charges were detonated. Massive explosions were also set off in a salt mine in Louisiana as part of transatlantic tests.

The results were regarded as a resounding success, with the detectable effects of some explosions being reduced by a factor of between 10 and 30. The problem of detecting and deciphering such tests remains.

The tests under Kit Hill passed without incident at the time and local people were either unaware or else unperturbed by the ongoings.

That was until March 1985, when mischievous newspaper reports suggested that nuclear waste had been stored in spherical granite chambers in the Excelsior Tunnel.

Following up the story, the Western Morning News even employed a qualified mining engineer to survey the tunnel with a Geiger counter to test for radiation. Nothing untoward was found.