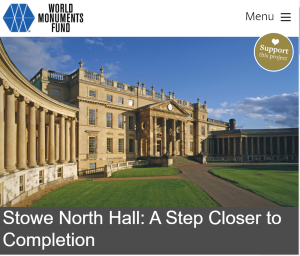 Completion of the restoration of Stowe House’s North Hall, largely funded by World Monuments Fund (WMF), came a step closer this summer with the installation of a statue of Mercury opposite the imposing Laocoön group installed last year.

Restoration of the Hall started in 2015 with conservation and cleaning of William Kent’s magnificent gilded ceiling portraying Viscount Cobham amid military splendour. This celebration of the estate’s creator dated to the early 1730s but the insertion of a staircase to the Egyptian Hall below in 1803 precluded a return to the original scheme and so the trustees of the Stowe House Preservation Trust commissioned further research to clarify the hall’s architectural and artistic evolution.

At this stage, a fortuitous discovery was made. The owner of a house in the south west of England showed one of Stowe’s professional advisors a statue that had once held pride of place in Stowe’s North Hall.  The bronze Laocoön group had been purchased for Stowe House in the 1830s and had stood in the hall until Stowe’s great sale of 1848.  Subsequent sale records confirmed its authenticity and arrangements were made to produce a copy.  That fixed the date for North Hall’s restoration and for targeted research to confirm the detailed aspects of the restoration project.

The owner kindly agreed to lend the statue to SHPT to enable a copy to be made.  A contract was let with Rupert Harris Conservation in London for conservation of the original statue and casting the copy for display at Stowe.  Meanwhile, work started to find a bronze Mercury to stand opposite the Laocoön as it had in the nineteenth century.  Rupert came up trumps, finding a bronze Mercury to exactly the same dimensions as the Stowe bronze, itself a copy of Giambologna’s celebrated statue now in the Museo Bargello, Florence. House inventories and sales catalogues recorded the statue in detail and identified the purchaser in 1848.  Unfortunately, it had been sold again and so it was not possible to compare the two or consider making a copy. SHPT, however, confident that the statue we have purchased is a very close copy of Giambologna’s original and a good substitute for the bronze.  It is now installed in pride of place beneath Kent’s golden ceiling on a grey marble column and a restored stone floor corresponding to the one on which the original stood at the house’s heyday.

It now remains to complete the restoration with copies of the Roman busts that were placed on plinths and consoles around the Hall.  Fundraising is underway to raise the modest sum required to complete this phase in Stowe’s resurrection.