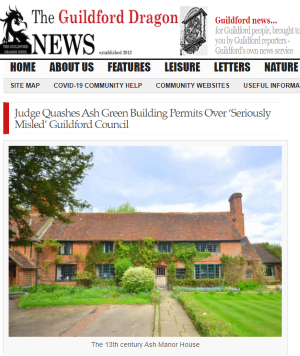 The judge, Mrs Justice Lang, said: “I am satisfied, on the balance of probabilities, that the planning committee could have reached a different decision if they had been properly advised.”

Mrs Wyeth-Price, a former chair of the Ash Green Residents’ Association (Agra), applied for a judicial review (JR) on behalf of the association and the residents of Ash Green to protect the historical Ash Manor and its setting.

She said: “We feel this area was just added into the Local Plan with no consideration of impact on the manor and its surroundings which have remained untouched for 750 years.

“The council has been asked, at least four times, by the lead local Flood Authority and consultants to investigate the drainage, groundwater and flood risk issues but have not done so. We also feel a 250-year-old plus oak tree, the symbol of our village, deserved appropriate protection.

“Obviously, we are delighted with the result, especially as such a respected judge agreed that the appropriate weight wasn’t applied.

“This is a victory for the residents, who have been amazingly generous with their time, money and unending support. We are more than grateful to Emma Montlake from the Environmental Law Foundation and John Fitzsimons from Cornerstones who gave their time, effort, guidance and support and helped us achieve this.”

The four-hectare Ash Manor is part of one of the strategic development sites included in Guildford’s controversial Local Plan, adopted in April 2019, days before the Conservatives lost control of the borough council.

Historic England had said the agricultural and open character of the setting of Ash Manor has remained constant through its history and the proposed development would cause harm to the setting of the heritage assets, assessed at less than substantial harm….

Andy Morris, strategic land director of developers Bewley Homes, said: “It is our view that the very comprehensive planning officer’s report, which contained all of the information needed for a determination of the application, including all the technical aspects of the scheme, was clear and understood by members….”

Mrs Wyeth-Price said: “I’m sure GBC are disappointed, as Cllr Bigmore says, but I hope they will take the lessons to be learned from this. I think our result illustrates that the new council’s approach to openness and transparency is sorely needed.

“My only concern is that it could so easily happen again, and I hope the council will review how applications are addressed, with a more balanced approach, at the planning committee meetings in future.”

This has been part of a long fight for AGRA. There have been seven planning applications around Ash Manor since 2014, all objected to by Ash Green residents.

But the developer has already submitted, what objectors claim is, “an identical application for the same site, with the same problems, even before the hearing”….