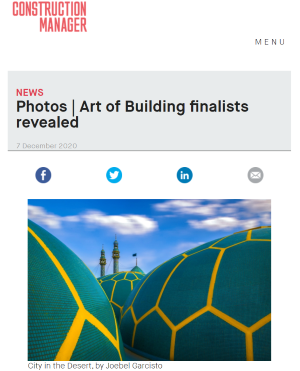 The Chartered Institute of Building (CIOB) has revealed the 15 finalists in its Art of Building Photographer of the Year competition.

… photographs from Australia, China, Indonesia, Russia, the USA and the UK…

… competition is a universal conversation…

The 15 images made it past the judging panel out of the thousands submitted from more than 100 countries around the world.  In the final are photographs from Australia, China, Indonesia, Russia, the USA and the UK.

Now the CIOB is asking the public to help choose this year’s winner, as the competition now enters its final stage.

The competition, now in its 11th year, celebrates the creativity of the construction industry and the built world around us.

Caroline Gumble, CIOB chief executive, said: “We applaud everyone who entered our competition – so much of the photography we’ve seen for this year’s Art of Building is breathtakingly beautiful. It’s also truly inspiring to see how these photographers can tell the story of the built world around us with new and unusual perspectives. This competition is a universal conversation between those who build and those who wonder at the buildings around us.”

Vote for the winner on the competition website. Winners will be announced on 26 January 2021.