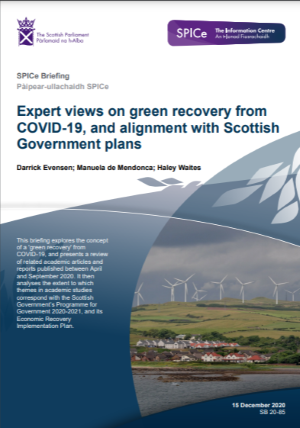 Green recovery seeks to achieve the dual aims of lifting an economy out of recession, and society out of a crisis, alongside protecting and improving the environment, according to a briefing from the Scottish Parliament Digital Publications (SPDP) which sets out what selected experts consider to be appropriate approaches to a Green Recovery from COVID-19.

….The briefing draws on a review of academic articles and reports published between April and September 2020.

The concept of green recovery first emerged in academic research and political discourse after the 2008-2009 financial crisis. Several years of research on the impacts of green recovery policies employed through and after the 2008 recession have revealed that the green recoveries promised in many nations did not fully live up to expectations. Twelve years on, the context has changed – there is now a very different degree of understanding of environmental problems and solutions, and awareness of both climate and biodiversity challenges. For climate change especially, there is a visibility of climate impacts, higher level of societal ambition, more readiness for structural change, financial viability of new low-carbon technologies, and a shared global aspiration under the 2015 Paris Agreement

Within this changed context, there is a growing body of academic and other literature around the understanding that the climate and nature emergencies must be at the centre of recovery from COVID-19.

The briefing outlines an analysis of 20 academic journal articles, 16 academic reports, and 5 letters or reports from academic organisations or committees with advice specific to Scotland. These documents were reviewed alongside some academic research undertaken on effective green recovery policies. From this work sixteen key policies associated with a green recovery were selected as a lens through which to scrutinise the approach of the Scottish Government.

Nine green recovery policies were recommended in at least 40% of the documents in the sample. These are (in order of frequency of mention):

The analysis also examined recommendations for implementing green recovery policies, and found that:

Understanding the frequency that a policy is recommended by academics and experts in the field points to areas of relative agreement on policies that are valuable in a green recovery, though it should be noted that it is only one measure of the value of a policy.

Overall, articles tended to focus more on climate change and carbon impact rather than on biodiversity loss, water quality and other environmental externalities.

There is broad correspondence between the policies most recommended by academic experts and those proposed by the Scottish Government in the Programme for Government 2020-2021.

In addition, the analysis identified the Scottish Government spend on each policy as set out in the 2020-21 Programme for Government.

The frequency with which policies are recommended by academics highlights only that this is an area that scholars agree should form part of a green recovery, but areas of high agreement are not necessarily the areas that require the most funding relative to other green recovery policies. Therefore a direct comparison between the frequency that a policy is mentioned and Scottish Government budgets is not straightforward. Nonetheless, the Scottish Government has, in general, allocated large amounts of funding to the same policies that are most frequently mentioned by scholars in the academic sample.

It must however be noted that this study only sets out Scottish Government spend relative to spend on other green recovery policies, not relative to total Scottish Government spend, and the success of these efforts also relies on the weight of these policies relative to other policies which may be classified as going against green recovery principles (e.g., road building, support of carbon-intensive industries and practices such as aviation). An analysis of this relativity is outwith the scope of this study; however it should be borne in mind when considering the Scottish Government’s commitment to a Green Recovery.

Ten years of research on green recovery policies following the global financial crisis of 2008 broadly reveals that the policies were ineffective due to being too focused on very narrow sectors of the economy, allocating a relatively small percentage of GDP and of recovery funds to green recovery specifically, and not focusing enough on the long term.

The most frequently-mentioned policies in the reviewed literature appear to indicate that a broader approach to a green recovery is being taken in 2020. While the analysis in this briefing does not evaluate whether or not the Scottish Government’s commitments and proposed spend are sufficient to bring about a green recovery, there appears to be a broader focus on a range of green recovery policies, as well as the commitment to a green recovery being “at the heart of” the Scottish Government’s response1. Careful attention to the long-term transformation – not just short term recovery – will be essential, and opportunities for longer term (5+ years) planning can be undertaken through updates of longer-term strategies such as the Climate Change Plan.