IHBC features ‘Heritage from the doorstep’: Dangerous eyesore Birnbeck Pier has been sold – to its current owner 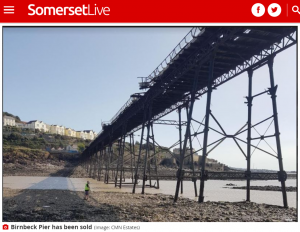 Current owner Wahid Samady was ordered to find a new buyer for the pier by the High Court. Weston-super-Mare’s dilapidated Birnbeck Pier has been sold – to its current owner.

… RNLI …. wants to return its operations to the island and restore public access…

[Council] … plans to continue with its compulsory purchase…

CNM Estates, headed by businessman Wahid Samady, was ordered by the High Court in December to find a buyer for the pier by January 22.

A new company – Birnbeck Holdings Limited – has now been set up by CNM Estates which has purchased Birnbeck Island and the historic pier.

Bosses at the company say they now intend to start work on repairing and redeveloping the site.

“The company intends to start work on the vital repair and the redevelopment of site without the hindrance of historical litigation.”

CNM Estates purchased the pier in 2012…

The authority had previously made a financial offer to CNM Estates in a bid to avoid going through the lengthy and costly process of applying for a CPO on the pier.

However this was not accepted.

The plan is to secure the ownership of the pier then transfer the landmark to the RNLI.

The back to back deal would mean the pier is transferred immediately to the RNLI, which wants to return its operations to the island and restore public access.

As part of the plan, the RNLI will restore the pier, which over the years has fallen into a dangerous condition, and build a new lifeboat station, training facility and other operational buildings required.

The lifeboat service – based on the landmark for 131 years – was forced to move off the island in 2013 after concerns for the crew’s health and safety because of the dilapidated state of the structure.

A spokesman for CNM Estates and Birnbeck Holdings Limited added: “CNM Estates has always supported the RNLI presence on the island as it has been identified as the best location for life saving and remains open to a consensual arrangement with the group to enable this….

CNM Estates has appealed the CPO to both the Magistrates Court and to the Secretary of State….

North Somerset Council says it plans to continue with its compulsory purchase of Birnbeck Pier….