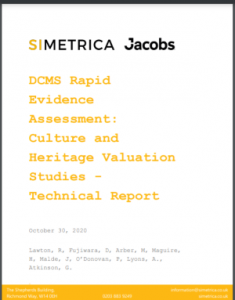 The Department for Digital, Culture, Media & Sport (DCMS) has issued an assessment of the current state of the literature valuing the services provided by culture and heritage assets.

DCMS commissioned Simetrica-Jacobs to assess the current state of literature valuing culture and heritage assets. Studies were identified that align with best practice methods. Weaknesses and gaps in the evidence base are identified within the report.

Data science techniques were used to collect 171 values from relevant academic papers and grey literature reports. The results are presented within an Evidence Bank of economic values. The Evidence Bank includes valuation details, such as estimated monetary values for assets, a grading of the quality of each study, the article details, and an overview of each valuation method used. The focus of this REA is on studies that employ economic approaches for monetary valuation of culture and heritage assets. The report and evidence bank will act as useful resources for organisations who want to find relevant evidence to support decision making.