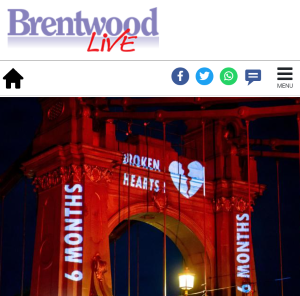 Hammersmith Bridge has been illuminated bright red in a Valentine’s Day stunt aimed at highlighting ongoing delays to its repair, as the 133-year-old west London bridge has been closed to traffic since April 2019 when cracks appeared in its pedestals.

… cracks appeared in its pedestals…. [£46M to] ‘avoid a potential catastrophic failure’…

The 133-year-old west London bridge has been closed to traffic since April 2019 when cracks appeared in its pedestals.

It then closed to pedestrian, cyclist and river traffic in August after a heatwave caused the faults to “significantly increase”.

Fed up residents projected a message onto the bridge on Saturday to mark the six-month anniversary of its full closure.

Helen Pennant-Rea, chairwoman of the Hammersmith Bridge SOS Residents’ Group, said the “Valentine’s Day card” was intended to be a “fun and entertaining way to draw attention to what remains a serious issue”….

Hammersmith and Fulham Council, which owns the bridge, wrote a letter to the Prime Minister in August stating the estimated cost to make it safe and “avoid a potential catastrophic failure” is £46 million.