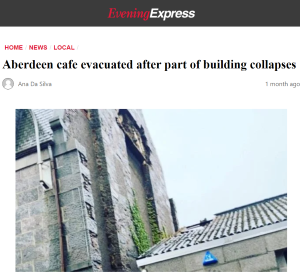 An Aberdeen cafe the Tartan Pig on Holywood Place has been forced to close after part of a neighbouring building collapsed., the city’s Evening Express reports.

… Life does throw some blows…

Fire crews were called at 10am by police to a “partially collapsed building”.

Staff at The Tartan Pig, located on Hollybank Place, were evacuated after the roof of a neighbouring building was damaged….

…it is understood an investigation into the building’s structure will now be required….

An online statement from the cafe said: “We are now closed today due to being evacuated from our building.

“The side of the adjoining flats has come loose and damaged the roof of our neighbour’s building and further investigations into the building’s structure will be required.

It added: “Life does throw some blows, but we got to stay strong together.”