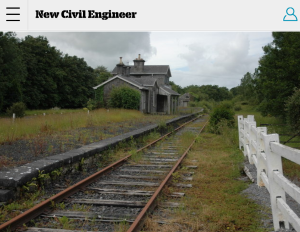 The third and final round of the Restoring Your Railway ideas fund has now closed, with more than 85 bids received to restore old railway lines to their former glory.

Led by the Department for Transport (DfT), successful proposals will be awarded up to £50,000 each to progress plans to reinstate stations and restore passenger services closed during the 1960s Beeching cuts.

Successful bids will be announced this summer.

Rail minister Chris Heaton-Harris said it was “fantastic” to have received the bids.

In the last funding round, backers of 15 proposals were awarded cash to develop their business cases. Ten schemes won backing in the first round.

The DfT has said that the aim of the funding is to level up the country and improve connectivity for communities.

A DfT brief states that any “bid for funding should focus on making the strategic and economic case for the scheme, as well as setting out any recognised challenges”.

This includes demonstrating the socio-economic benefits of reopening the railway, a description of proposed services and an estimate of infrastructure and operating costs.

DfT guidelines add: “Your submission must include any constraints, such as buildings that have now been constructed upon the route or complications anticipated beyond straightforward reinstatement of the line.

“We would also expect to understand the land ownership of the route and whether landowners would expect compensation. For example, we would expect councils to provide necessary land that they owned for free if the scheme went ahead.”

Successful bidders will then work with DfT officials to agree the scope of the proposal to be investigated and to develop the project’s business case for receiving more substantial development funding.