IHBC features ‘Heritage from the doorstep’: Campaigners bid to halt plans to demolish cinema that inspired The Beatles 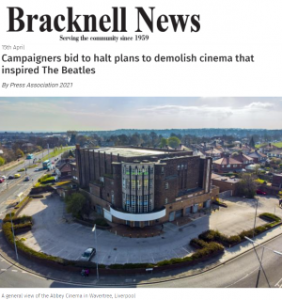 Campaigners have launched a bid to save an art deco cinema at the centre of a Beatles heritage site where John Lennon spent many ‘happy hours’, reports the Bracknell News, as it faces demolition to make way for a new Lidl branch.

…move has been widely condemned by heritage campaigners and locals…

The discount supermarket chain revealed plans to pull down the Abbey Cinema in Wavertree village, Liverpool, after surveys it commissioned suggested the property was “beyond economic repair”.

The proposals, which the firm has opened to public consultation before a planning application is submitted, show Lidl would replace the former Co-op store with a design intended to “pay tribute” to the original building.

The move has been widely condemned by heritage campaigners and locals.

An application to make the cinema a listed building has been submitted by Save Britain’s Heritage, and Culture Secretary Oliver Dowden has been sent a report by Historic England inspectors.

In the original lyrics to the song In My Life, released in 1965, Lennon referred to the cinema as somewhere he had spent “happy hours”, while bandmate George Harrison was born opposite the building.

Liverpool planning expert Jonathan Brown, who prepared the listing application for Save, said: “To replace an elegant 82-year-old survivor of the Blitz with a single-storey shed in a car park is the equivalent of recording over an Oscar-winning epic with a wobbly home movie.”

The application has gained public support with assistance by Wavertree resident Clare Devaney, whose petition to save the building with “A Lidl help from its friends” has been signed by almost 6,000 people….

Abbey Cinema is legally protected as a “designated heritage asset”, but this does not protect the building from demolition….

Lidl said the new store would create up to 30 jobs…..