IHBC features ‘heritage from the doorstep’: Hereford historic rectory to be demolished in favour of homes 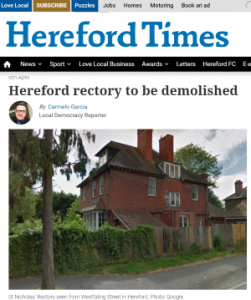 Plans to demolish a historic Hereford rectory and replace it with nine homes have been given the go-ahead, reports The Hereford Times.

… Victorian Society had called on the council to reject the proposals…

The rectory was built around 1910 by the local firm of Nicholson and Hartree.

Historic England noted the high quality of the materials used to build the rectory and the remarkable intactness of its original and detailed interiors.

And conservation charity the Victorian Society had called on the council to reject the proposals.

They said the destruction of the building would be a further erosion of the city’s heritage.

Tom Taylor, Conservation Adviser for the Victorian Society, previously said: “This former rectory is the kind of solid, well-designed and well-executed historic building that forms the fundamental texture of our surviving Victorian and Edwardian suburban built heritage.

“It has survived essentially intact, both inside and out. There is no suggestion that it is necessary for structural reasons to demolish it, or that it is beyond repair.

“There is also no suggestion that marketing the building as a single dwelling has been attempted or reasonably discounted.

“To replace this structurally sound, high-quality historic building and large garden with a row of nine new dwellings and a car park will result in the loss of a non-designated heritage asset and harm the historic and architectural character of Hereford.”

The charity also said the scheme would not be in keeping with the council’s climate emergency declaration and the Church of England’s pledge to take climate change seriously.

But a Hereford Diocese spokesperson said the Archbishop of Canterbury’s Commission on Housing, Church and Community is encouraging churches and dioceses to think about how they use their property to meet local housing need.

“The proposed redevelopment plans for St Nicholas’ Rectory, will provide nine affordable family homes in the city centre,” they said.

“We recognise the need for all parties to engage in the planning process and to ensure that the different views regarding this project are heard. Our approach to this project is to proceed with stakeholder engagement.

“We will seek to incorporate affordable environmental building standards whilst providing sustainable housing for the local community.”

Herefordshire Council has approved the scheme with conditions.