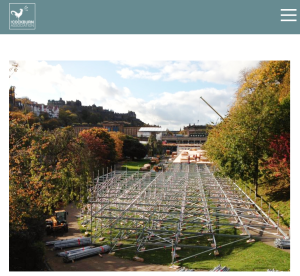 The Cockburn Association, an IHBC MarketPlace Stallholder, has been reading – and reacting to – official communications from Scotland’s Chief Planner.

… Liberalising planning control (and by extension other regulatory processes…

Reading official communications from Scotland’s Chief Planner might not figure highly on most people’s ‘must read’ lists, but it can be very instructive.  Concerns articulated by us early in the pandemic on the implications for good city planning becoming a victim of expedient decision-making in the name of economic development sadly seem to be in danger of becoming a reality.

On March 22nd 2021, in a final communication to local planning authorities before the Holyrood election, John McNairney re-emphasised the Scottish Government’s official line expressing, “…encouragement for a relaxation of planning control, particularly through choosing not to take enforcement action, in a range of circumstances that could help businesses and services to diversify and continue to operate within our communities during the pandemic.”

He elaborated still further by restating the Scottish Government’s “…general support for planning authorities to exercise their discretion and allow for temporary breaches of planning control that are reasonable in the current difficult circumstances.”

The Cockburn has great sympathy for local businesses who have been hardest hit by the lockdown restrictions.  We agree that it is essential for the local economy get back on its feet.  Liberalising planning control (and by extension other regulatory processes such as licensing) will be welcomed by some, no doubt, as part of this.  However, short-term fixes tend to have long-term consequences.  In this, we do not agree that lower standards of management or turning a blind eye to developments that normally would be unacceptable is a good step forward.

In fairness, the letter of 22 March was simply a reaffirmation of similar messages including one letter sent on 18 December which offered local authorities some examples of this desired “relaxed approach”.  Here, it urged planners to break long-held protocols to support:

That doesn’t seem too bad, on the face of it.

Last week we revealed the growing number of occasional licenses being sought from the Licensing Department for outdoor food and drink provision across the city. This traditional licensing matter has blurred into the realm of planning as businesses seek to install semi-permanent structures in various locations, structures that would traditionally have required planning consent and all that goes with that process. A mini space deck erected on Cockburn Street as part of The Scotsman Lounge’s outdoor offering, for example, elicited some fairly polarised positions social media.  The Leader of Council, Councillor McVey, would though herald its final iteration as a success after city planners worked quickly with the owner to make the initial large and intrusive structure less so. But there has still been no planning application lodged that we can identify. Little or no official consideration appears to have been given to neighbouring residents, to listen to and gather their views on the introduction of a new outdoor hospitality space in their neighbourhood.

A number of residents and local groups from across the city have been in touch with us instead in recent days asking for advice and assistance as nearby public pavements and roads are being turned over to support the post-COVID economic activities of private commercial businesses. Detractors would like to believe that this is merely a NIMBY reaction that should simply be dismissed or ignored.  Far from it. It stems from an earnest request for civic and civil respect; respect for the amenity of local neighbourhoods and respect for the quality of the lives of the people who have to live with the impacts of visiting groups of people enjoying a drink or two outside again. Nobody will soon forget recent scenes of mayhem in the Meadows, especially this precious greenspace’s nearest residents.

In the heart of the Old Town, a former car parking space next to a residential tenement is currently being turned into a permanent outdoor beer garden for an adjacent business, with planning officers apparently deciding that its neighbouring residents deserved no say in the matter. This time planning consent was sought and through a fast-track process, given.  However, the consent was given as a permanent one, not temporary as one might have expected for a COVID-recovery proposal.

Another occasional license granted in Bruntsfield has seen a hospitality business being granted permission to put tables and chairs on a remote area of pavement, well removed from and out of sight of their business frontage, because their neighbouring business did not require the space.  This temporary license has now apparently been rescinded.

Some respondents on social media are of the opinion that residents living above or near a hospitality business must simply endure whatever comes their way with no further comment or complaint as they “choose to live there”.  Indeed, City Council officials have even suggested on occasion that city centre residents are entitled to lesser amenity standards than others.  The Cockburn’s view is that that everyone has the right to equal civic amenity, whether they live in the city centre or suburb, above a hospitality business or not.  If we value a residential city centre, we need to think carefully how this is managed.

We all want to support local businesses that have been hard put upon by being forced to close for much of the past year.  We must also keenly safeguard the social wellbeing and civic amenity of local residents in our city too.

In responding to the Scottish Government’s Chief Planner’s “…general support for planning authorities to exercise their discretion and allow for temporary breaches of planning control that are reasonable in the current difficult circumstances”, the Cockburn asks what else will this cover?

Does it mean even less regulation or enforcement of the short-term-let industry that has depopulated parts of the City?  Does it mean further commodification of our precious parks and gardens to support new exciting COVID-recovery drinking venues (temporary, of course, until it all blows over) or other COVID-recovery related private events and exclusive activities?

Some Public Health experts have suggested that we will be living with COVID for a long time to come.  We are therefore left to ponder what that means for the current “relaxation of planning control.”

See more on the 2021 School MarketPlace