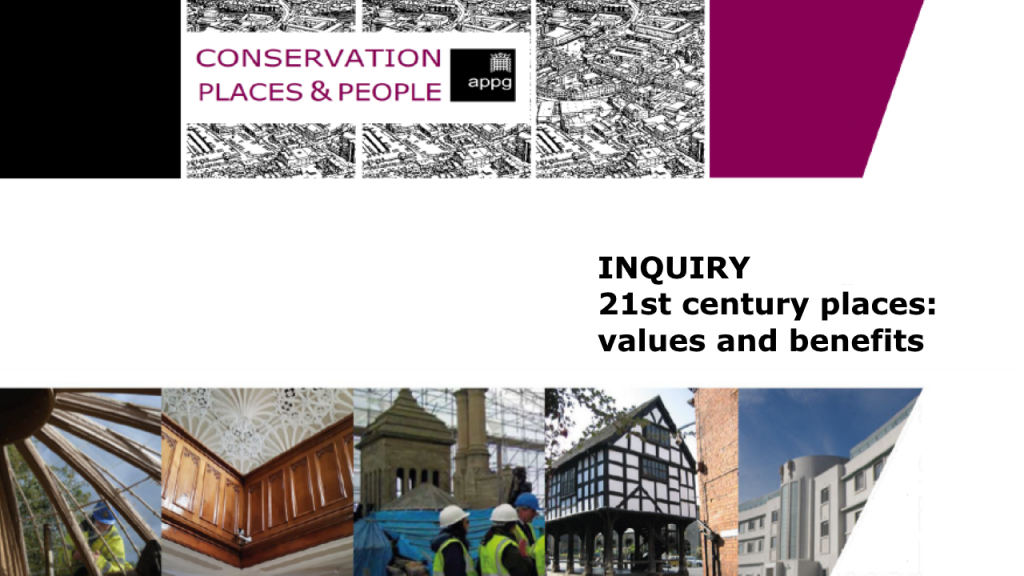 The first oral evidence session of the All-Party Parliamentary Group on Conservation, Places and People (CPP APPG) @CPPeopleAPPG inaugural inquiry into the ‘Value of Heritage’ took place in a closed session on 26 May, chaired by Layla Moran MP, and including Lord Kerslake; James Grundy MP; the Duke of Wellington, the Earl of Devon and Lord Carrington, all seeking new ways forward in conservation economics, inspired by Historic England; the Federation of Master Builders (FMB), and The Heritage Alliance (THA).

IHBC Chair David McDonald said: ‘The IHBC is still learning how best to support this critical new APPG as its Secretariat, but we were absolutely delighted with the submissions and the discussions between key players and engaged politicians such as Layla and Lord Kerslake – who is just stepping down as President of the Local Government Association – that can help us all make a real difference’.

I’d like to personally thank again all those involved on the day, especially Layla who took such care as chair to make sure all the key points were raised, explored and addressed!’

IHBC Director Seán O’Reilly said: ‘In the coming weeks we’ll get more records and reports out about this historic event.’

‘We appreciate that this has been a slow process, not helped by a pandemic.  It’s also been less accessible than many would expect, as the APPG members were keen to explore ideas outside the public gaze.’

‘That said, we’re delighted to highlight a unique opportunity for anyone to find out more about the processes of working with this very special APPG, and the often fraught world and timescales of political leads!’

‘We’ll have a stall on our work as Secretariat at the Heritage MarketPlace at the IHBC’s 2021 School, so if you do want to find out more about any of this, just join us on 18 June!’

David Blackman, consultant to the IHBC as APPG secretariat, writes:

The opening oral evidence of the ‘Value of Heritage’ inquiry examined issues surrounding heritage and the economy. MP and peer members of the APPG heard evidence from a panel of three witnesses: Adala Leeson, Head of Socio-Economic Analysis and Evaluation at Historic England; Jessica Levy, Director of Policy and Communications at the Federation of Master Builders (FMB) and Lizzie Glithero-West, Chief Executive of The Heritage Alliance..

Questions from APPG members ranged from the economic benefits of heritage to skills shortages and the fiscal measures required to stimulate investment in the sector, notably a harmonisation of VAT rates on new build and repair projects.

Two further oral evidence sessions, focusing on levelling up & regeneration and society & environment, are due to take place before Parliament goes into summer recess.

The IHBC serves as the CPP APPG’s secretariat.

See more on the CPP APPG in its first Newsletter

Find out more from David Blackman on setting up and supporting an APPG at the IHBC’s 2021 School on 18 June at the Heritage MarketPlace:

See the IHBC’s own  Stall ‘Billboard’