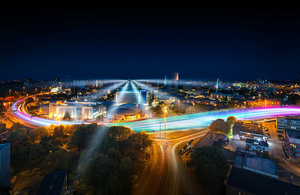 Culture Secretary Oliver Dowden has launched the search for UK City of Culture 2025, while now groups of towns will now be able to join together and apply.

UK Culture Secretary Oliver Dowden has today launched the competition to find the UK’s next City of Culture.

The competition, delivered by the Department for Digital, Culture, Media and Sport (DCMS) in collaboration with the devolved administrations, will use culture as a catalyst for levelling up areas outside London and put culture at the heart of their plans to recover from the impact of the pandemic.

The new winner will take on the baton from Coventry and be at the centre of the UK’s cultural spotlight for a year.

For the first time, groups of towns will now be able to join together and apply for the title to be awarded to their local area – widening the scope of which areas of the country could benefit.

Towns and cities will need to articulate a strong and unique vision for their future growth, celebrating local heritage and using culture to bring communities together, build a sense of place and inspire local pride. Bidders will also be asked to demonstrate how investment in culture and creativity will drive growth, how they will open up access to culture and to develop partnerships and celebrate links with places across the UK.

“UK City of Culture is a fantastic showcase of the huge impact culture has in towns and cities across the country. From Derry-Londonderry, to Hull and Coventry, previous winners have shown how the competition can deliver greater cultural participation, drive economic regeneration and boost local pride. I encourage towns and cities across the UK to put forward bids for 2025 and champion their local arts and culture scene. I’m also delighted to confirm the competition will run in future years, as a sign of our commitment to levelling up culture across the whole of the UK.”

“I encourage Scottish towns and cities to take this opportunity to celebrate their local culture and consider bidding to be UK City of Culture in 2025.

“The competition can have a transformational impact on host communities and has the potential to bring a major boost to Scotland as we look ahead to the recovery and renewal of the culture sector.”

“The UK City of Culture competition offers a wonderful opportunity for the winning city to make its mark on the UK’s cultural landscape.

“Through raising a city’s creative and cultural profile and drawing in visitors, winning this prestigious title can also provide a real social and economic boost.

“It would be brilliant to bring the prize to Scotland for the first time and I’d strongly urge Scottish towns and cities to get involved.”

“As Derry-Londonderry proved in 2013, the UK City of Culture is a prestigious title which served to harness its wonderful heritage and culture to change perceptions of the city, attract investment and create local employment.

“A thriving arts and culture scene has long been at the heart of a successful Wales and will remain so as we recover from the pandemic.

“The UK City of Culture competition represents an opportunity to not only bring significant financial investment and regeneration benefits, but also to boost Wales’ established reputation as globally-recognised creative hub.

“I encourage towns and cities across Wales to get involved in the competition, to champion hidden talent and promote local art scenes so that we can continue to highlight the unique cultural and artistic talents of Wales.”

The future for the competition has also been confirmed, with Oliver Dowden announcing today that UK City of Culture will become a regular event in the country’s cultural calendar – running in 2029 and beyond.

The first city to take up the mantle was Derry-Londonderry in 2013, followed by Hull in 2017. The City of Culture title attracted millions of visitors and drew in significant investments for both cities. The cultural programmes have had a lasting positive impact on local people, with surveys showing that communities felt prouder and more positive about the place they live after their City of Culture year.

Bidding for the title in its own right can have a hugely positive impact on a place – helping to bring partners together and develop strategic cultural leadership. To encourage as many places as possible across the UK to bid and to benefit from the UK City of Culture process, DCMS will offer funding of up to £40,000 to up to six longlisted places to help develop their applications.

Coventry City of Culture 2021 is already providing a blueprint for how culture can be at the heart of social and economic recovery. It is expected that Coventry’s status as UK City of Culture will see a significant boost in visitor numbers and economic investment with over £110 million in additional investment secured over the 2018-22 period. The programme aims to attract around 5,000 volunteers and create more than 900 jobs.

The bids for the 2025 title will be assessed by an independent panel chaired by Sir Phil Redmond. He is joined this year by Claire McColgan, Director of Culture Liverpool, as Deputy Chair. The panel of 11 members will include representatives for Scotland, Wales, Northern Ireland and England. It will visit each of the shortlisted cities, to be announced later this year, before each city or town makes a final pitch to become the next UK City of Culture.

The formal application process for the 2025 competition is now open. The winning city or town will be announced in Spring 2022. Prospective bidders will be invited to join a two day workshop in Coventry which will provide further detailed information and advice on the bidding process.

“I am delighted with the announcement of the competition for 2025, with its expected continuance as a regular feature in our cultural calendar. The UK City of Culture years provide the UK with an opportunity to project its creativity to the world while providing cities the opportunity to revaluate their place in the UK, to come together, forge stronger partnerships and reset both internal and external perceptions as Derry-Londonderry 2013, Hull 2017 and currently Coventry 2021 are experiencing. It is the excuse for people to talk to each other, rather than at each other.”

“The impact that winning the UK City of Culture title has on a city is huge. Over the last four years in Coventry, we have seen significant investment come into the city as a direct result of being UK City of Culture 2021, leading to an ambitious reimagining of the city’s public realm and cultural infrastructure as well as supporting the extraordinary artists, freelancers, cultural organisations and charities that make this youthful and diverse city so exciting. Our year as UK City of Culture has just begun, but we can already sense the long-lasting impact on the city, its business and its communities.

“We wish the best of luck to those cities, towns and regions who are competing for the 2025 title.”