IHBC’s features ‘Heritage from the (Borders) doorstep’: Former Scottish Borders textiles mill which sold under Ballantyne brand up for sale 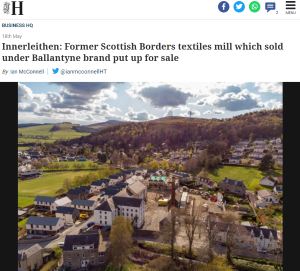 A former major textiles mill site in Innerleithen in the Scottish Borders, which sold cashmere around the globe under the Ballantyne brand has been described as being ‘suitable for a variety of commercial uses or residential development’, is being put up for sale, writes The Herald.

… four-floor mill building was constructed in 1788…

The former mill sold cashmere around the globe under the Ballantyne brand.

Shepherd Chartered Surveyors, which is bringing the Brodies Mill and outbuildings to market, noted they were “on a self-contained 0.9-acre regeneration site”.

The four-floor mill building was constructed in 1788 by Alexander Brodie and was subsequently added to in a piecemeal fashion over the 19th and 20th centuries, to become Caerlee Mill, Innerleithen’s largest employer making and selling cashmere around the world under the Ballantyne brand.

It noted the retained buildings were B-listed and “lie centrally located within Innerleithen and a short walk from the town centre”.

Whiteburn’s managing director, Eve McCurrich, said: “We have had preliminary discussions with a number of interested parties, including a mountain bike innovation centre, and are now ready to see a viable and complementary use emerge for these buildings, compatible with the character of our Caerlee development as well as the village of Innerleithen….”