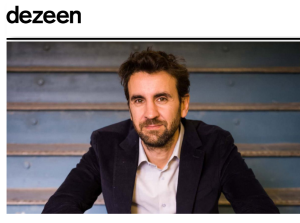 Young architects are rejecting ‘cookie-cutter modernism’ in favour of approaches that prioritise conserving the earth’s resources according to Joseph Grima, who has written a manifesto calling for a new type of non-extractive architecture.

…A lot of practices …. very attuned to a philosophy that is not particularly formalist…

… Barcelona Pavilion as an example of ‘top-down’ architecture….

Space Caviar co-founder Grima argued that architects increasingly see the discipline as a “form of stewardship of the natural environment” rather than a compositional exercise, as they become aware of the damage that construction is doing to the planet.

“There is a different attitude emerging, which is not based on the kinds of pre-conditions that might have been 100 years ago,” said Grima, saying that modernism’s “top-down” approach is increasingly being challenged.

“A lot of practices, especially the younger practices, and a lot of the discourse that is circulating at the moment, is very attuned to a philosophy that is not particularly formalist.”

Grima made the comments during a live Dezeen talk to mark the launch of Non-Extractive Architecture, an exhibition and research programme at the V-A-C cultural institution in Venice….

The pavilion, built for the 1929 International Exposition in Barcelona, is regarded as a seminal example of modernism for its formal qualities and use of materials such as green marble, travertine and onyx, yet little attention is paid to the origin of these materials….

“There are a lot of dangers in the elevation in sort of veneration of that model of heroic architecture,” he added. “It’s this kind of top-down relationship with the landscape that was very much driving the impetus of modern architecture.”

“We’re not particularly interested in this centralised, heroic model of the architect,” he continued. “That’s a dangerous model to give to young designers today.”…

He hopes that this new vernacular could lead to a more collaborative, community-led direction for architecture in general.

“We’re interested in the architect as a collaborative figure who is deeply embedded within the community,” Grima said….

Non-Extractive Architecture: On Designing without Depletion takes place from 15 March to 31 January 2022 at V–A–C Zattere Dorsoduro 1401, 30123 Venice, Italy. Due to coronavirus, the exhibition is currently closed and will open once Covid regulations allow it to.