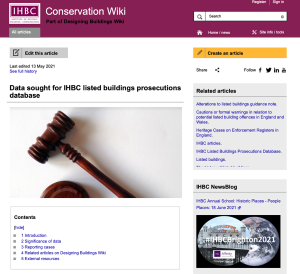 Designing Buildings Wiki (DBW) – host platform for the IHBC’s Conservation Wiki and the ‘construction industry knowledge base’ – has issued a call across its immediate network of 13,000 construction practitioners for input to the IHBC listed buildings prosecutions database.

… helpful to the courts when considering sentencing…

…. Updated data is being sought for IHBC’s listed buildings (LB) prosecutions database. The database was created in 1996 as a resource for comparative information about unauthorised activity related to LBs. It is dependent on data that has been voluntarily provided by IHBC members.

The IHBC has found that “some local authority prosecutions have been successfully concluded, but the details have not been forwarded to us,” says Kindred, which means the Institute has had to depend instead on reports from local newspapers.

He adds, “In informing IHBC directly, we can follow in particular cases resulting in low fines to see if these were informed (or not) by the database or the Historic England guidance or our other guidance.”

IHBC members who have been involved with a case – particularly one that has not already been added to the database – are asked to forward the details to Bob Kindred at government@ihbc.org.uk. If possible, reports should provide available details, including:

Kindred notes that additional information (e.g., a guilty plea or observations by the court), a press release or photos is always informative.

This article originally appeared on the IHBC NewsBlog under the headline, ‘New data sought for IHBC’s “LB Prosecutions Database”: Help the IHBC help you (and in court too)’! It was published on 11 May 2021.