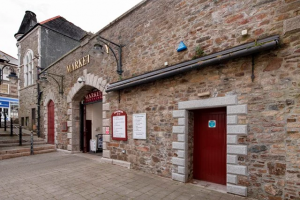 The Buttermarket in Redruth, Cornwall has been listed at Grade II by the Department for Digital, Culture, Media and Sport (DCMS) on the advice of Historic England.

‘… historic town centres have always adapted to changes in fashion, taste and convenience…’

Redruth’s market was built in 1825-26 at the instigation of local landowner Sir Francis Basset (1757-1835). The name ‘Buttermarket’ was first used in 1884; however, it was never a true butter market for the sale of dairy goods, with its focus being on fish, meat (particularly pork), and shoes.

By 1791 Redruth’s was the largest market in Cornwall, but its existing timber-framed and thatched building was demolished in 1795 as it was obstructing traffic. It was noted by many contemporaries that this was a great improvement in terms of space and increased trade.

The new two-storey market house had an open ground floor facing onto a courtyard with colonnades to its north housing butchers’ stalls, whilst the upper floor was used for meetings. The ‘loggia’ style was popular for market buildings in the early-19th century, although uncommon in Cornwall.

The new market buildings were just one of several improvements in Redruth in the early-19th century. The buildings continued to be altered over time, reflecting the changing needs of the market and the fluctuating prosperity of the town. This evolution is part of the building’s special historic and architectural interest which has led to its Grade II listing.

“We’re delighted that the heritage value for Redruth of the whole Buttermarket site has been recognised by this designation. The Buttermarket is a much-loved part of our town centre, but it’s been getting steadily more run-down for years – the Redruth High Streets Heritage Action Zone gives us a once-in-a-generation chance to bring it back to its former glory and fill it again with a buzz of small traders, business start-ups, cafes and workspaces. We believe this is the way forward for our town centres in the 21st century.”

By the 1870s the decline in the mining industry had plunged Cornwall into recession, but Redruth was establishing itself as an economic centre. Investment in the town’s buildings, including a public programme to remodel the market buildings, helped secure Redruth’s economic success in challenging times.

In the late-19th century, the market’s owner, Gustavus Lambert Basset (1834-88) began a major campaign of improvements to the market, which are attributed to local architect James Hicks (1846-96).

In 1877 a new meat market building was constructed on the site of the butchers’ stalls to the north, and alterations were made to the older buildings around the courtyard. In the 1880s, parts of the market were incorporated into the lower floors of the Mining Exchange and the Wheal Peevor Purser’s Office (both by James Hicks and Grade II listed).

At the end of the 19th century demand for the market began to decline. Butcher’s shops opened in the town diverting some of the pork trade away from the market. It also suffered from competition by high street shops in the post-war years, and although it remained important to farmers and butchers into the 1950s, the meat market ceased trading in 1958.

The meat market was destroyed by fire in 1982 and rebuilt as a shopping arcade in 2001. In 2017 the Buttermarket buildings and Mining Exchange were bought by the Redruth Revival Community Interest Company (CIC), who also acquired Wheal Peevor Purser’s Office in 2021.

“This fascinating building has been at the heart of the community of Redruth for more than 200 years, and it reflects how important Redruth’s market is to people’s lives and the local economy. It also reminds us that buildings in historic town centres have always adapted to changes in fashion, taste and convenience, and they can continue to do so in the future.”