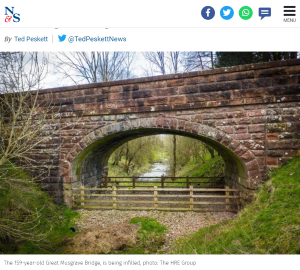 Supporters of two heritage railways in Cumbria have been lobbying council officials and their local MP over the infilling of a 159-year-old railways bridge reports the News and Star.

.. action was needed to ‘remove the associated risk…’

The Eden Valley and Stainmore railways have a long-standing ambition to reunite their operations by laying five miles of track from Kirkby Stephen to Warcop.

Contractors engaged by Highways England moved onto a site at Great Musgrave on Monday May 24 to start burying the 159-year-old structure – something the railway companies said should require planning permission.

The heritage railway companies said they are concerned over the impact of infilling of the bridge, and say its loss would place a substantial obstacle in their way, putting their proposed connection in jeopardy.

Project Manager for the Stainmore Railway Company, Mike Thompson, said:”It’s inexplicable that such a destructive project is allowed to go ahead without proper public scrutiny.  “There are huge potential economic benefits from an 11-mile line through the wonderful landscape….”

Highways England manages the Historical Railways Estate of 3,100 disused structures on the Department for Transport’s behalf.

In a letter sent on 23 April 2020, they told Eden District Council that an “assessment undertaken in 1998 found the structure suitable only for 17 tonnes” and action was needed to “remove the associated risk of structural collapse and harm to the public”….

The railways’ volunteers and supporters lobby Dr Neil Hudson, the MP for Penrith and The Border, and Jason Gooding, Eden District Council’s Acting Chief Executive, urging them to save the bridge.

A spokesperson for Eden District Council said: “Highways England do have permitted development rights to undertake certain works across the country, without the need of planning permission from Local Authorities.

“In Eden, the Planning Service has opened a dialogue with Highways England to understand the full extent, nature and reasoning for the proposed works at Great Musgrave Bridge.

“This is an ongoing matter and discussions have not yet concluded.

“Once sufficient information has been provided by Highways England, the Planning Service will be able to judge whether these works do constitute a Permitted Development or if they require prior planning permission.

“This information will inform what action, if any, can be taken in relation to these works.”….