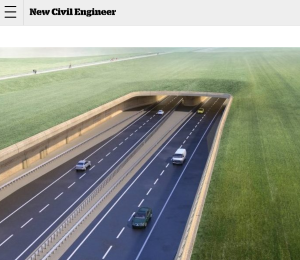 The legality of the government’s second Road Investment Strategy (RIS2) will be determined during a two day High Court hearing.

… government ‘failed to carry out Strategic Environmental Assessment of RIS2…

Campaigners from Transport Action Network (TAN) claim that transport secretary Grant Shapps broke the law when approving the £27.4bn RIS2 by failing to consider its effects on the environment.

The investment plan, approved in March 2020, includes £14.7bn worth of road route upgrades between 2020 and 2025. The Lower Thames Crossing and the Stonehenge Tunnel …. are among the major projects which will get underway by 2025.

… In particular, the High Court claim states that there was a failure to take into account the UK’s net zero carbon emissions target as well as the Paris Climate Agreement. It adds that the government “failed to carry out Strategic Environmental Assessment of RIS2”.

The hearing comes just a week after a separate High Court challenge was heard in relation to the planning permission granted for the Stonehenge Tunnel scheme.

That case specifically focuses on the legality of the scheme’s development consent order, granted by transport secretary Grant Shapps despite the Planning Inspectorate’s recommendation to throw out the planning application.

A judge is to rule on the Stonehenge Tunnel case in the coming weeks….