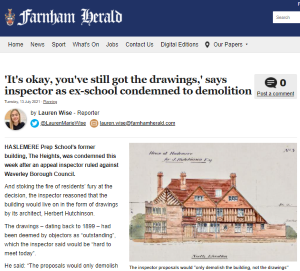 The Farnham Herald has headlined a case where a former school is lost as the planning inspector notes the proposals would ,only demolish the building, not the drawings, while he can see ‘nothing in the response from HE that leads me to believe the building is… to be considered a non-designated heritage asset’.

… proposals would only demolish the building, not the drawings, which would be retained…

The inspector is basically saying that if you just have a set of drawings, it is okay to demolish the building as the paper record is more important than the standing structure.

HASLEMERE Prep School’s former building, The Heights, was condemned this week after an appeal inspector ruled against Waverley Borough Council.

And stoking the fire of residents’ fury at the decision, the inspector reasoned that the building would live on in the form of drawings by its architect, Herbert Hutchinson.

The drawings – dating back to 1899 – had been deemed by objectors as “outstanding”, which the inspector said would be “hard to meet today”.

He said: “The proposals would only demolish the building, not the drawings, which would be retained.”

Applicant Twist Heights Ltd had submitted five applications for appeal – all of which were refused by Waverley Borough Council officers….

A public inquiry to determine the future of the former school – also known as The Heights – began in April this year, with the planning inspectorate decision ruling in favour of the applicant.

Reasons for the appeal’s approval – which have been subject to much discussion – include the building’s “limited heritage significance” and the quality of architect Herbert Hutchinson’s drawings.

Plans for The Heights were initially drawn up by Mr Hutchinson – who trained at The Slade and was a founding member of the Haslemere Society of Artists – in 1899, and built in 1900.

Inspector Owen Woodwards said: “Objectors have emphasised the quality of Mr Hutchinson’s drawings as being outstanding, with a competence that would be hard to meet today. Whether or not this is the case, the proposals would only demolish the building, not the drawings, which would be retained”….

Mr Woodwards confirmed that following an application to Heritage England (HE) for listing of the building, HE found “the house is of architectural merit and the architect is a figure of local repute”, but “HE has not concluded the building or the architect are of such merit as to warrant either listing or to be put forward for a full assessment”.

He said: “There is nothing in the response from HE that leads me to believe the building is of sufficient heritage value to be considered a non-designated heritage asset.