IHBC features ‘Heritage from the (beyond the) doorstep’: Shrewsbury house filled with concrete foam to save it from collapse – it’s not Narnia either… 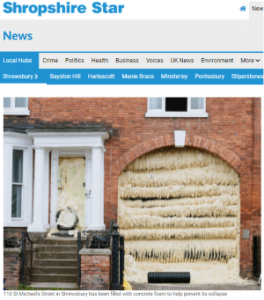 The Shropshire Star says ‘… it might look like something out of Narnia but the unusual appearance of a county home is actually down to emergency work stopping it crashing down into the street.’

… concerns the building ‘could collapse at any time’…

Emergency work has now been carried out to stabilise the house – ahead of a decision over what do to about its future.

The work from Derbyshire firm Restek, started on Saturday and managing director Tim Knight said that within 48 hours they had managed to stabilise the house.

The work has seen the space below the building’s archway, and the corridor leading inside from its front door, filled with pipes and geopolymer foam concrete – it means both are completely blocked and impassable.

The combination creates an incredibly strong honeycomb structure, which increases the load the building can bear – a measure which will allow a decision to be taken over what happens to the building. Shropshire Council’s structural engineers have also said St Michael’s Street can reopen.

Mr Knight said: ”We used two very big 600ml diameter pipes stacked on top of each other, put them in with a tele-handler and grouted around them. It becomes one solid homogeneous mass where the corridor and the arch are. There are 200 cubic metres we had to grout. That is now one solid structural mass of geopolymer and the pipes as well and that what the building is standing on at the moment.”

Shropshire Council had said earlier this week that there were concerns the building “could collapse at any time”, and that demolition could be “the only option”.

“… The owner, with the advice from structural engineers will make a decision whether to demolish or repair the property.”

110 St Michael’s Street comprises a large town house located within the Shrewsbury Conservation Area, which the council understands was built as an integral part of the adjoining terrace in the 1850s.

Residents were evacuated from the building last month after a resident raised the alarm about its condition with Shropshire Council.