IHBC features ‘Heritage from the doorstep’: Manchester council threatened with legal challenge over ‘support’ for skyscraper – before consultation ended 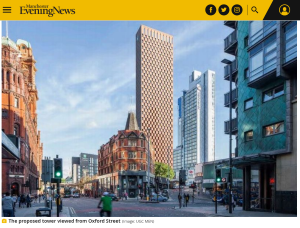 A report by planning officers supporting the scheme was published before the public consultation had finished, reports the Manchester Evening News.

…would become one of the tallest buildings in Manchester…

Manchester council has been threatened with legal action after a report supporting the building of a controversial skyscraper was published before a consultation on the plans had ended.

A decision on the city centre development proposed by GMS Parking Limited has been twice deferred by the planning committee amid backlash from residents and councillors.

The £130m scheme, dubbed a ‘tombstone’ by critics, would see a multi-storey car park on Great Marlborough Street near demolished and partly rebuilt beneath the 55-storey tower.

More than 850 student flats are proposed in what would become one of the tallest buildings in Manchester, dwarfing the neighbouring 37-storey Liberty Heights and 32-storey UNITE blocks nearby.

The planning application has been subject to several objections from the Macintosh Village residential community, and the company (MVMC) which manages it, on the other side of Great Marlborough Street.

In January the planning committee delayed making a decision on the development in order to visit the site to get a better idea of its potential impact on the surrounding area.

A second deferment was requested by GMS in February to allow the developer to iron out technical issues with its application.

The most recent consultation on the proposals ended on June 24, with a letter to residents stating that ‘all replies are carefully considered before any decision is made’.