IHBC features ‘Heritage from the (engineer’s) doorstep’:  ‘Ashamed to be an engineer’: NCE readers react to Highways England bridge infilling 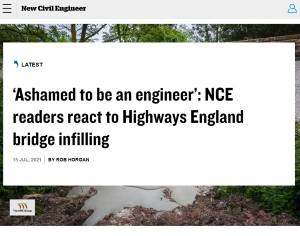 New Civil Engineer (NCE) readers have expressed ‘shame’ in their profession after images of a the concrete-infilling of a 159-year-old masonry arched bridge in the heart of the Cumbrian countryside were published in national newspapers and circulated widely on social media channels.

The 159-year-old masonry arched bridge in the heart of the Cumbrian countryside was filled in almost two weeks ago by Highways England contractors.

Engineers have since hit back at the decision to pour 1,000t of concrete beneath the Great Musgrave bridge arch.

Robert Hairsine described the infilling as “disgraceful vandalism”, while J Haines said the work “looks more like fly-tipping than engineering”.

Meanwhile, Philip Alexander and Andrew Hodgkinson both stressed that they were “ashamed” as civil engineers.

David Edwards added: “Ashamed to be a civil engineer. How do I explain this to my family and friends?”

The structure is part of the Historical Railways Estate managed by Highways England on behalf of the DfT and comprises 3,800 bridges, tunnels and viaducts, including 77 listed structures.

Jacobs acts as the ‘sole provider’ (designer) for the Historical Railways Estate and has just been reappointed for another seven years. Six contractors will support Jacobs in carrying out any work, including Dyer & Butler and Balfour Beatty.

According to The HRE Group – an alliance of engineers, sustainable transport advocates and greenway developers – the bridge is one of 115 disused railway structures programmed for infilling by Highways England, with 15 others due for demolition….

Kitching explained an alternative way to restore bridges without the need for infilling….