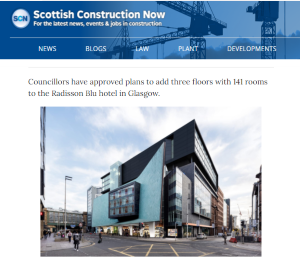 The extension by Maith Design would significantly expand the 247-room Argyle Street building….

A design statement …. argues that a scheme design has been arrived at “which aligns commercial, planning, design and other relevant considerations to deliver a high-quality upper-storey extension that will make a very positive contribution to the site, the surrounding streetscape and the wider city.”

The original Radisson Blu won multiple national and international awards for architecture and hotel design and voted among the top-10 buildings to be built in Scotland since 1945.

The planned extension had been criticised earlier this year by Professor Alan Dunlop, the original architect of the building.