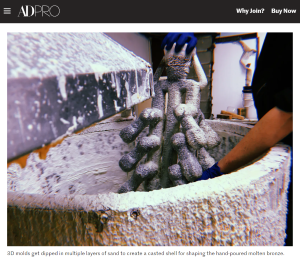 … one of the original lever designs….resurfaced in the archives in better condition, offering a deeper insight into the past…

When Scott Baxter was approached to refashion the imposing century-plus-old door levers for the New York Public Library, he wasn’t daunted by the challenging request. As a matter of fact, exhilarated was the descriptor he used.

“We’ve handled a lot of difficult projects but the fact that this is an iconic building in New York, my hometown, was special,” the founder of SA Baxter Design Studio & Foundry, located in the Hudson Valley, tells AD PRO. An iconic building undergoing a significant renovation, no less: Led by design firms Mecanoo and Beyer Blinder Belle, the $200 million transformation of the library’s Mid-Manhattan branch into the Stavros Niarchos Foundation Library unveils 180,000 square feet of new amenities—expanded seating areas, business and learning centers, and a new rooftop terrace included—to the public.

Also featured at the grand unveiling, which took place earlier this summer, are nearly 70 of Baxter’s elaborate door lever (and neck and escutcheon plate) replicas, with plans for more. The original knobs were installed in 1915….

Fortunately, one of the original lever designs, salvaged from an area of the library that received little traffic, resurfaced in the archives in better condition, offering a deeper insight into the past. That single finding helped Baxter determine that the neoclassical beauties, decorated with rosettes and climbing vines, were cast in bronze, not the brass they were mistakenly believed to be crafted from.

Once in the studio, Baxter’s restoration process began with 3D scanning of a first-edition lever and “turning it over to an artist who literally re-creates it by sculpting off the base model,” says Baxter….