IHBC features ‘Heritage from the WHS’s doorstep’: Height reduced at Edinburgh concert venue with work poised to begin next year 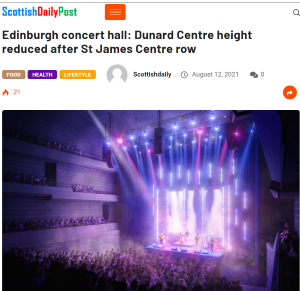 Designs for Edinburgh’s first purpose-built music and performance venue in over one hundred years have been scaled back in height to avoid a potential legal battle with developers of the nearby St James Centre.

REVISED plans to build the first concert hall in Edinburgh for more than a century have been drawn up after a legal row with the company behind a new shopping centre forced the height of the building to be scaled back by seven metres.

Impact Scotland, the charitable trust behind the Dunard Centre, proposed to be built next to the St James Centre in the heart of the New Town, was forced back to the drawing board after shopping centre bosses threatened the development with legal action.

Last January, Impact Scotland agreed to redesign the venue after Nuveen Real Estate, the company behind the shopping centre which opened its doors in June, threatened a judicial review unless changes were made.

Nuveen claimed that views from its centrepiece hotel, the design of which has split opinion in the capital, would be blocked by the cultural venue – forcing the height to be scaled back.

….the new plans are set to maintain the 1,000-person auditorium…. while a planned large foyer has been scaled back….