IHBC features ‘Heritage from the doorstep’: Fears over the future of historic Brighton shul 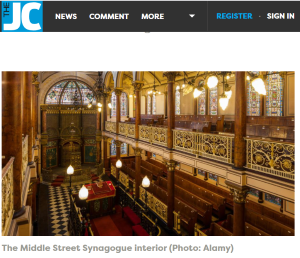 The JC reports on ‘Grave concerns’ over repair issues at Brighton’s Middle Street Synagogue, ‘one of the most beautiful and significant in the UK’.

… the delaying of the necessary work could have serious consequences…

The acting curator of Brighton’s historic Middle Street Synagogue has voiced “grave concerns” about the condition of the building following damage caused by a leak from a radiator.

Middle Street has not operated as an active synagogue for around 17 years but has continued to host visiting groups and special activities. Its current closure has prevented involvement in events such as the Brighton Fringe Festival.

Pre-pandemic, Mrs Bhogal, a property developer, initiated a successful series of fundraisers in the city centre shul, among them a Fiddler on the Roof singalong and an evening focusing on Jews from Arab lands. “Middle Street shul is such an important part of our Jewish heritage, both in Brighton and globally,” she said. “As one of the most beautiful and significant shuls in the UK, it must be completely restored and reopened to the public….

Her concerns about the building’s future were echoed by Winston Pickett of the Sussex branch of the Jewish Historical Society of England….

Meanwhile, Brighton and Hove heritage commissioner Roger Amerena, joint chair of the city council’s Conservation Advisory Group, has expressed concern about the state of the building and the lack of action to secure its future.

Mr Amerena organised a meeting three years ago, attended by local and national Jewish representatives, recommending at the time that a separate trust should be established to attract funds for the synagogue’s restoration from bodies such as the World Heritage Fund.

“Brighton and Hove Heritage Commission regrets that there has been no decision or action made regarding the sustainable future of the synagogue,” he said. “The synagogue is running into further disrepair as a result of the water ingress, the crumbling of the front corners and general erosion on the western facade facing the street. This building is a national asset, one of the most spectacular synagogues in Europe. It has to be saved.”