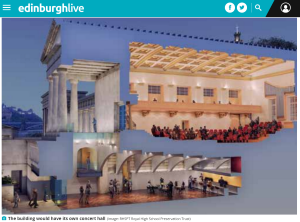 The Royal High School Preservation Trust has put forward detailed proposals to the City of Edinburgh Council for the iconic Thomas Hamilton building on Calton Hill to be restored as a ‘world-class centre for music education and public performance.’, writes Edinburghlive.

The former Royal High School site in Edinburgh could become a National Centre for Music under plans funded by Scotland’s biggest arts philanthropist.

Carol Colburn has pledged to donate £55million through the Dunard Fund to turn the historic building into a ‘music education and public performance’ centre that would ‘benefit the whole of Scotland.’

The 192-year-old unused school is currently owned by Edinburgh City Council who have been searching for a new use for it after rejecting plans to turn it into a luxury hotel.

Now the Royal High School Preservation Trust hope they can create the National Centre for Music which would have “clearly defined spaces for classical music education, community access and engagement and performance”, reports the Edinburgh Evening News.

The centre would include St Mary’s Music School which have already been approved by Edinburgh councillors, as well, plans for “a café, gallery and visitor centre, set in generous and fully accessible public gardens.”

The concert hall is also being backed by violinist Nicola Benedetti and her foundation, as well as IMPACT (International Music and Performing Arts Charitable Trust) Scotland ….

William Gray Muir, Chairman of The Royal High School Preservation Trust said:“The restoration of the old Royal High remains one of the most exciting and important cultural developments in Edinburgh and indeed the whole of Scotland….