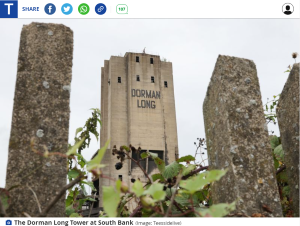 Tees Valley Mayor Ben Houchen has successfully appealed to new Culture Secretary Nadine Dorries to axe protected status for what he said was a ‘rotting coal bunker’, as reported by TeesideLive before the demolition.

…‘It is simply industrial heritage vandalism.’…

… Campaigners celebrated last week after Teessider Nick Taylor lodged a successful bid to list the former South Bank coal tower – with the hope it could become a hub to showcase the area’s cultural and industrial heritage.

The Grade II listing also put the brakes on the imminent demolition of the 1950s tower.

But it has now been stripped of Historic England status after an appeal from the Tees Valley Mayor Ben Houchen – and the intervention of the Department for Digital, Culture, Media and Sport (DCMS).

It’s understood Teesworks leaders had hoped to bring the 180ft tower down in the early hours of Sunday morning as General Electric wind turbine plans on the wider site take shape.

They claimed the listing had cost an extra £40,000 to £50,000 to the taxpayer and risked projects earmarked for the wider site.

An appeal was lodged on Sunday night alongside a request to the Secretary of State for Digital, Culture, Media and Sport.

Mr Houchen said this had been successful ….”I would like to send a message to those that think trying to stop these developments is the right thing to do – our heritage does not lie in a rotting coal bunker, our heritage lies in the people that built this great region.”

“It lies in the structures that stand tall across the world, from The Shard, Sydney Harbour Bridge and One World Trade Centre.”

… Two petitions to save the tower were set up in the wake of demolition plans emerging and the news will be greeted with dismay by campaigners.

Charities and supporters have argued the tower is a monument to Teesside’s industrial past – with concerns about the level of consultation with the public ahead of the move.

“This building was built in the 1950s by Dorman Long and that name resonates throughout Teesside, the North-East, the UK, and the rest of the world.

“It is simply industrial heritage vandalism.” ….

Historic England confirmed the site’s owners had requested an urgent review of the Grade II listing – and its status had been removed by the DCMS.

A spokesperson added: ‘We were able to visit the site and after further assessment we confirmed our advice that the tower merits consideration for listing at Grade II.’….