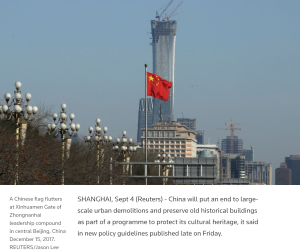 China will put an end to large-scale urban demolitions and preserve old historical buildings as part of a programme to protect its cultural heritage, it said in new policy guidelines.

… now forbidden to ‘demolish the real and construct the fake’…

The State Council, China’s cabinet, said the aim of the new guidelines was to “systematically protect and pass on” the country’s cultural heritage and “tell the stories of China and the Communist Party comprehensively and accurately”.

China’s President Xi Jinping said in June that China had to improve the way it “tells stories” about itself in order to better reflect its status on the world stage….

The new urban planning guidelines said it was now forbidden to “demolish the real and construct the fake”, chop down old trees, randomly change old place names or make changes to lake or river systems.

It said effective measures should also be put in place to protect buildings that “reflect important historical events and bring together the emotional memories of the public”.