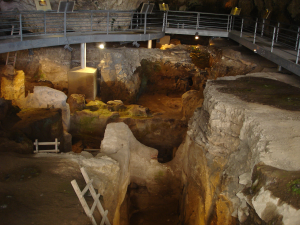 Theopetra Cave, located in the Meteora limestone rock formations of Thessaly, Central Greece, is likely to be the place of the oldest human construction on earth, reports the Greek Reporter.

According to archaeologists, evidence of human habitation in the cave can be traced without interruption from the Middle Palaeolithic to the end of the Neolithic period.

Theopetra Cave may be oldest man made structure

Theopetra Cave is located at the foot of a 100-meter (330 foot) tall limestone cliff which looms over Theopetra village. The Lethaios River, a tributary of the Pineios River, flows nearby.

Geologists say that the limestone hill was formed between 137 and 65 million years ago, during the Upper Cretaceous geological period.

Theopetra cave has been described as being roughly quadrilateral in shape, with small niches on its periphery. It covers an area of about 500 square meters (5,380 square feet). The cave has a large entrance, which allows a good deal of light to enter into the interior….

Using a relatively new method of dating known as “Optically Stimulated Luminescence,” scientists have now been able to date this wall to around 23,000 years old.

The age of the wall has led researchers to assume that it had been built by the cave’s inhabitants to protect them from the cold. It has been claimed that this is the oldest known man-made structure in Greece, and possibly even in the world….

The cave’s population seemed to fluctuate over the years, relative to these changes in climate…..