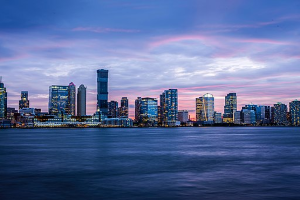 A fascinating interactive map, from Esri, is a snapshot of New York City overlaid on the modern-day satellite map.

The early 19th century was a time of great change for New York, which had already cemented its status as America’s largest city.

The opening of the Erie Canal helped turn the city into a shipping powerhouse, and there was a building boom on the horizon. Cholera epidemics, fires, and riots swept through the city at various points.

This fascinating interactive map, from Esri, is a snapshot of New York City during the tumultuous time (1836 to be exact), overlaid on the modern-day satellite map.

Getting the Lay of the Land

The base map used above is the stunning “Topographical Map Of The City and County Of New–York, and the adjacent Country”, published by the prodigious mapmaker, Joseph Colton….

This map includes all the usual features, such as roads and prominent buildings, but it also has some clever secondary information built in as well. For one, shading indicates ares that were more built-up at the time. There are also a number of visual techniques to indicate topographical features as well….

At this point in time, development in Lower Manhattan extended until about 14th Street, where buildings began to give way to open spaces. The city’s grid pattern was beginning to take shape, following the Commissioners’ Plan laid out in 1811. At the time, New York was anticipating massive growth, and the straightforward grid pattern was an efficient way to prepare the city for rapid expansion.

In the 1800s, fire was an ever-present danger for city dwellers. In fact, a major fire tore through Lower Manhattan a year prior to when this map was published….

As well, this topographical map clearly shows the numerous outcroppings spread across the island….