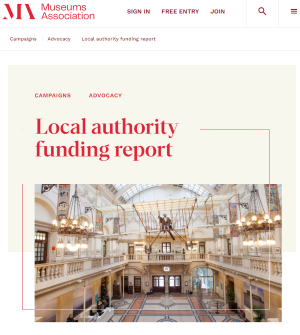 The Museums Association (MA) commissioned new research in 2021 that looks at the impact that austerity has had on the museums sector in the UK since 2010.

We commissioned new research in 2021 that looks at Local Authority Investment in Museums after a Decade of Austerity. The report, which was carried out by independent researchers, sets out new figures on the impact that austerity has had on the museums sector in the UK since 2010.

Our research demonstrates that:

Cuts in funding are having a material impact on the ability of museums to maintain basic levels of service and work with their communities. Museum leaders are particularly concerned about the loss of revenue funding which enables museums to open their doors and pay staff.

There is substantial variation in the level of funding cuts between different local authority areas. Key factors underpinning decision-making on cuts include:

Local museums have consistently supported their communities during the pandemic and are playing a critical role in supporting community recovery. In light of this new research into funding for local museums the Museums Association is calling for:

Sharon Heal, director of the Museums Association, said: “This independent research lays bare the debilitating reduction in funding that local museums have suffered over the past 10 years. These museums provide a vital community service, and in some towns and cities they are amongst the few civic spaces that are open and welcoming to all.

“We know that local authorities are under enormous pressure to provide statutory services, despite sustained cuts to their budgets, which often means that museums lose out. Throughout the pandemic museums have supported home schooling during lockdowns, provided safe spaces to overcome the impacts of social isolation and supported communities to come to terms with challenges they face. If they are to continue to provide this support and to play a critical role in the recovery, then they need fair and sustained funding.

“We are calling for a fair funding settlement for local authorities in the forthcoming budget and for administrations across the UK to recognise the value of their local museums and to fund them.”