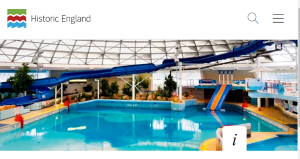 Swindon’s Oasis Leisure Centre has been given Grade II listed status after a year-long campaign to save it after landlord Seven Capital revealed plans to rebuild, but removing the dome and lagoon, reports The Swindon Advertiser.

The organisation said…. “The swimming pool dome at the Oasis Leisure Centre in Swindon has been listed at Grade II by the Department for Digital, Culture, Media and Sport on Historic England’s advice.

The Oasis Leisure Centre, designed by Peter Sargent of Gillinson, Barnett and Partners in 1974, opened on New Year’s Day in 1976.

“The swimming pool is the best and earliest example of the newly developed building type, which went on to gain huge popularity in the 1970s and 80s, marking the cultural shift from swimming for fitness to swimming for fun. Most early of the early examples of these buildings have now been lost to redevelopment….