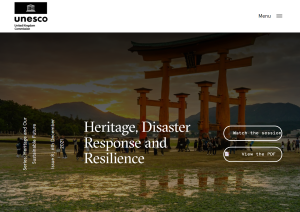 World Heritage properties and heritage sites in general are exposed to the impacts of natural and man-triggered catastrophic events, which threaten their integrity and may compromise their value…

… disaster risk is not only a measure of external, potential threats, but also of the inherent vulnerabilities…

The earthquake that occurred in Kathmandu, Nepal, in April 2015 or the fire at the Royal Palaces of Abomey, Benin, in January 2015 are high profile examples of the vulnerability of cultural heritage worldwide.

Natural heritage can, quite similarly, be threatened by such events. Disaster risk at heritage sites is in part a function of their exposure to hazards that are determined by their natural and technological environment (e.g. earthquake- or flood-prone areas, industrialized zones, human-activity etc.). However, disaster risk is not only a measure of external, potential threats, but also of the inherent vulnerabilities existing at any given site.

If on the one hand natural hazards are harder to foresee or control, on the other, vulnerabilities can be more easily addressed in an effort to lower disaster risk at any given location; this because vulnerability is related to a diminished capacity to anticipate, cope with, and respond to the impact of a given hazard, and is determined by factors that can be more easily influenced (e.g. risk awareness, existence of appropriate response capacities, socio-economic factors etc.).

It is therefore very important to invest in reducing disaster risks at World Heritage properties in order to mitigate the possible impact of major hazards on these precious resources.

Recent studies, moreover, have demonstrated how heritage, in both its tangible and intangible forms, is not simply a passive entity in the face of disaster, but has a significant potential for reducing disaster risks in general. This potential can be harnessed to reduce vulnerabilities, and thus negative impacts on lives, property, and livelihoods, before, during and after a catastrophic event.

Heritage plays a crucial role in fostering resilience by reducing vulnerabilities, and also by providing precious assets for the sustainable social and economic development of an affected region during its recovery phase, by attracting investment, creating employment, or providing renewable natural resources. This is why the protection of heritage in the event of disaster is of paramount importance.

The Need for Action

There are many ways in which heritage can assist in reducing the impact of disasters. For instance, research in areas affected by seismic activities has shown that buildings constructed with traditional techniques have proven very resilient to earthquakes when well maintained.

For example, many observers noted that the preservation of traditional mud-brick and timber-laced dwellings would have most likely reduced the tragic death toll of the 2003 Bam, Iran, earthquake, as nearly all casualties were reported to have occurred in buildings constructed less than 40 years before, using a non-engineered and uncontrolled mix of modern techniques. Similarly, an appropriate use of land and the conservation of forests have been identified as major contributors to preventing landslides and floods.

The recent case of the fishermen from the Andaman Islands, who survived the 2005 tsunami because they knew, from their forefathers, that when the sea withdraws, humans must do the same, is another testimony to the ways in which traditional knowledge can help save lives. Similar traditional knowledge ensures fire protection at the World Heritage site of the Kiyomizu Dera Temple of Kyoto, in Japan. Other examples can be found in all regions of the world. Heritage and the traditional skills that have maintained it over the centuries, therefore, can be essential to enhance prevention and mitigation of disasters.

Despite all this, many World Heritage properties do not have any established policy, plan or process for managing, i.e. reducing risks associated with disasters.Moreover, existing national and local disaster preparedness and response mechanisms usually do not include heritage expertise in their operations. As a result, hundreds of sites are critically exposed to potential hazards, while communities worldwide are not harnessing the full potential of their heritage, both tangible and intangible, for reducing disaster risk.

This is why the UNESCO World Heritage Centre has started working, together with States Parties to the World Heritage Convention, Advisory Bodies and other partners, to integrate a consideration for heritage in DRR policies and programmes, and to strengthen preparedness for disaster risks at World Heritage sites. Actions undertaken include the development of a Strategy for Reducing Risks from Disasters at World Heritage Properties, the organisation of technical workshops and the publication of resource materials, as well as the provision of International Assistance mechanisms.