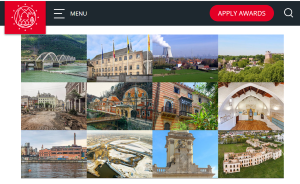 The 12 most threatened heritage sites in Europe shortlisted for the 7 Most Endangered programme 2022 have just been announced by Europa Nostra – the European Voice of Civil Society Committed to Cultural and Natural Heritage – and the European Investment Bank Institute.

From a medieval town in the western part of Germany to an exemplary 20th-century garden city in France; from one of the most authentic polder landscapes in Europe, located in Belgium near its border with the Netherlands, to an iconic building that is part of one of the oldest spa resorts in our continent, located in southwest Romania; from the last remaining industrial hub in the Swedish capital to sites of architectural, religious, military and artistic significance in Albania, the Netherlands, Spain and Ukraine.

….The selection was made on the basis of the outstanding heritage significance and cultural value of each of the sites as well as on the basis of the serious danger that they are facing today. The level of engagement of local communities and the commitment of public and private stakeholders to saving these sites were considered as crucial added values. Another selection criterion was the potential of these sites to act as a catalyst for sustainable development and as a tool for promoting peace and dialogue within their localities and wider regions.

The 12 endangered heritage sites were shortlisted by an international Advisory Panel, comprising experts in history, archaeology, architecture, conservation, project analysis and finance. Nominations for the 7 Most Endangered Programme 2022 were submitted by member organisations, associate organisations or individual members of Europa Nostra from all over Europe as well as by members of the European Heritage Alliance.

The final list of 7 Most Endangered heritage sites in Europe for 2022 will be unveiled in the spring of 2022.

The Executive President of Europa Nostra, Prof. Dr. Hermann Parzinger, stated: “These shortlisted endangered sites are a reminder that our shared heritage is fragile. By publishing this shortlist, Europa Nostra expresses its solidarity and support to the local communities and civil society organisations across Europe that are committed to saving these sites. They can count on us and our network of members and partners to raise our voices and act in defence of these 12 heritage sites at risk. These sites tell our shared history and can act as catalysts for sustainable development, social cohesion and intercultural dialogue.”

The Dean of the European Investment Bank Institute, Francisco de Paula Coelho, said: “Cultural heritage is a key resource for Europe’s identity, attractiveness and economic growth. It is about far more than ‘stones and bones’ from the past; today, it contributes to the distinctiveness of Europe in all its dimensions, urban and rural, regional and national. This is why the EIB Institute is proud to support the 7 Most Endangered Programme, which we have been implementing with Europa Nostra since 2013 with the aim of safeguarding and promoting Europe’s cultural heritage”.

The 7 Most Endangered Programme is run by Europa Nostra in partnership with the European Investment Bank Institute. It also has the support of the Creative Europe programme of the European Union. Launched in 2013, this programme forms part of a civil society campaign to save Europe’s endangered heritage. It raises awareness, prepares independent assessments and proposes recommendations for action. It also provides a grant of €10,000 per listed site to assist in implementing an agreed activity that will contribute to saving the threatened site. In most cases, the listing of an endangered site serves as a catalyst and incentive for the mobilisation of necessary public or private support, including funding.