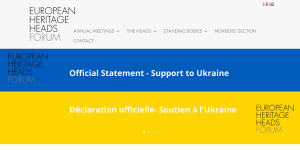 The Secretariat  to the European Heritage Heads Forum – an informal, professional and expert network for national heritage heads – has has coordinated its declaration of solidarity and support for Ukraine’s cultural heritage institutions.

The European Heritage Heads Forum (EHHF) is an informal, professional and expert network for national heritage heads (built heritage, landscapes and archaeology) of the countries of the European Union, the European Economic Area and the member-states of the Council of Europe. It provides a forum for information and experience exchange about the management of the historic environment in the 21st century.

The European Heritage Heads Forum (EHHF) Secretariat has coordinated the following statement in response to the ongoing situation in the Ukraine:

We, the undersigned Heads of the state heritage authorities, hereby declare our solidarity and support for Ukraine’s cultural heritage institutions.

We demand that Russia respect the conventions protecting the cultural heritage of Ukraine.

Russia’s invasion of Ukraine is causing enormous human suffering. In addition to the threats to life, health and civil structures, the invasion also poses an acute threat to the cultural heritage of Ukraine. There is now increasing testimony to how museums and historic monuments have been damaged by shelling, and the threat of theft and looting is ever-present.

The cultural heritage of Ukraine is closely linked to that of Europe and the rest of the world. There are seven UNESCO World Heritage sites in the country. They are an inalienable part of the cultural heritage which can create a sense of belonging, comprehensibility and security for us humans; this is especially important in times of vulnerability. Historical values in Ukraine are in danger of being lost. That loss affects all of us.

The 1954 Hague Convention states that “damage to cultural property belonging to any people whatsoever means damage to the cultural heritage of all mankind.”

The voluntary destruction of cultural heritage is a violation of international humanitarian law. After the Second World War left much of Europe in ruins, rules on the protection of the victims of war were adopted in 1949 through the four Geneva Conventions, which also concern cultural property. The additional protocols clearly state that it is prohibited to commit any acts of hostility directed against the historic monuments, works of art or places of worship which constitute the cultural or spiritual heritage of peoples, and to use such objects in support of any military effort. This applies to all warring parties.

The 1954 Hague Convention was adopted under the auspices of UNESCO. It seeks to protect cultural property and preserve cultural heritage in the event of armed conflict. Military personnel are obliged to refrain from all acts of hostility directed against cultural property.

We strongly condemn the unprovoked invasion of the democratic and free Ukraine.

We demand that Russia respect the 1954 Hague Convention and the Geneva Conventions on the protection of cultural heritage in Ukraine.

Linda Lainvoo, for the National Heritage Board of Estonia.

Joakim Malmstro?m, for the Swedish National Heritage Board.

Patrick Sanavia, for the National Institute for the Architectural Heritage of Luxembourg.

Kurt Farrugia, for the Superintendence of Cultural Heritage, Malta.

Susan Lammers and Ben de Vries, for the Cultural Heritage Agency of the Netherlands.

Oliver Martin, for the Swiss Federal Office of Culture.

Iain Greenway, for the Department of Communities Northern Ireland.

Jernej Hudolin, for the Institute for the Protection of Cultural Heritage, Slovenia.

Ulrike Wendland, for the German National Committee for Monument Protection.

Joa?o Carlos dos Santos, for the Directorate-General for Cultural Heritage of Portugal.

Nade?z?da Goryczkova?, for the National Heritage Institute of the Czech Republic. Hanna Geiran, for the Norwegian Directorate for Cultural Heritage.

Juris Dambis, for the National Heritage Board of Latvia.

Yiola Kourou, for the Town Planning and Housing Department of the Ministry of Interior, Cyprus.