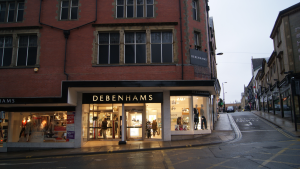 Debenhams site in Harrogate faces demolition objection from council as Developers Stirling Prescient are looking to transform the building into 50 apartments and two commercial units.

… conservationists fear it will negatively impact the historic street…

The former Debenhams store in Harrogate is facing objection from the local council for its plans to demolish the site, as conservationists fear it will negatively impact the historic street.

Historic England, Harrogate Civic Society, Historic Buildings and Places, and a council conservation officer have all objected to the proposals for the Parliament Street store which has stood empty since Debenhams closed the last of its branches in January.

The plans have been launched by developers Stirling Prescient, which is looking to transform the building into 50 apartments and two commercial units….

The company said its proposals are ‘sensitive’ to the character of Parliament Street, which is also home to Bettys Tea Room and Harrogate Turkish Baths.

But Historic England described the proposed five-storey building as “unsympathetic” to the area’s architectural heritage, plus the setting of the Grade-II listed Westminster Arcade which adjoins the site.

Historic Buildings and Places also said it “strongly disagrees” with a report which concludes parts of the former store are of limited historic interest.

The plans submitted to Harrogate Borough Council include two commercial units on the ground floor and a mixture of one, two and three-bedroom apartments on the upper floors of the proposed building.

Harrogate Borough Council principal conservation officer Emma Gibbens said in a letter of objection that she believed parts of the building could be redeveloped instead of being demolished.

Harrogate Civic Society said that it “cannot regard the proposal as satisfactory,” adding there was an opportunity to improve the setting of the Westminster Arcade which opened next door in 1898.

The civic society said: “This development is in a very important location in the conservation area and in particular it adjoins the listed Westminster Arcade.”

A decision on the plans is expected from Harrogate Borough Council in the coming weeks.