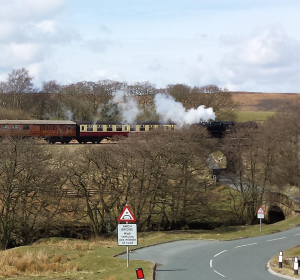 Heritage railways, which make millions for UK economy, are axing services as mines close and Russian sources are ruled out.

Britain’s heritage railways are running out of steam. Or, to be more precise, coal. Vintage rail operators across the country have warned that their stocks are now dangerously low and the prospects of replacing them in the near future look bleak….

Many of the UK’s heritage rail companies say they are already having to cut services just as they prepare for the Easter break, when their main operating seasons begin. “It is a very serious problem,” said Paul Lewin, of Ffestiniog and Welsh Highland Railways.

“UK coal for steam trains has now gone and our next supply source was to be Russia, which is now off the table….”

This view was shared by Steve Oates, chief executive of the Heritage Railway Association. “The situation is very serious,” he said…

An example of the value of heritage lines to a region is provided by Ffestiniog and Welsh Highland Railways, whose steam trains – which run from Porthmadog to Blaenau Ffestiniog and from Caernarfon to Porthmadog – attract around 200,000 visitors a year, generating an estimated £25m for the local economy.

The problem is that steam trains consume coal, an energy source now vilified for being a major source of greenhouse gases….