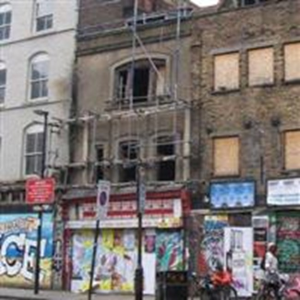 Spitalfields Life offers its own take on what it sees as a good way to manage amenity body oversight of development.

… to be ‘dismantled and reinstated,’….

…demolition by another name…

Do you imagine that a listed building is safe from demolition? Then you are wrong, because this is the fate of an important grade II listed 1735 weavers’ house at 113 Redchurch St. It is to be ‘dismantled and reinstated,’ to quote the weasel words of the planning application approved by Tower Hamlets Council, submitted by the owners of the Truman Brewery who own this building as part of their substantial local property portfolio.

If the word ‘demolition’ had been used in the planning application, then consultation with national amenity societies such as the Georgian Group and Society for Protection of Ancient Buildings would be required, yet this is demolition by another name. The authentic character, human detail and historic quality of the building will be lost.

While the fine mansions of the silk merchants in Spitalfields are familiar, the modest houses of the journeymen weavers in Shoreditch and Bethnal Green are far less known. Few have survived, which makes this pair at 113 & 115 Redchurch St that retain many of their original features especially significant.

Peter Guillery’s The Small House in Eighteenth-Century London is the definitive work on the subject. Guillery features these houses which were built by William Farmer, a local carpenter who became a Freeman of the City of London. Guillery writes ‘the absence of information about lower-status housing has led to skewed representations of the housebuilding world of eighteenth century London. These buildings are important representations of an all but ‘craft-less’ vernacular tradition in the metropolis.’

When I visited the Redchurch St weavers’ houses in 2013 in the company of members of the Spitalfields Trust and a Tower Hamlets Conservation Officer, I was impressed to witness the layers of patina and encounter the humble workrooms of the eighteenth century journeymen, unaltered as if the weavers had just left. The dereliction was palpable, yet the buildings were in no worse state than many others rescued locally by the Spitalfields Trust over the past forty years, such as 5 & 7 Elder St in the seventies.

At that time, we were told the owner intended to restore both buildings but wished to remove the dividing wall on the ground floor to permit a retail space occupying both houses. While the Trust welcomed repair of the structures, they would not endorse removal of the ground floor wall, suggesting instead the insertion of a connecting door as a means to achieve the same result without compromising the integrity of the buildings.

How curious then that the Spitalfields Trust – with their acknowledged expertise in this field – were not consulted about the recent planning application for 113 Redchurch St to be ‘dismantled and reinstated.’

Troubling questions arise. Since Tower Hamlets Conservation Officers were aware of the risk, why was a listed property able to decay to the point at which it became ‘too far gone’? Why was no notice served upon the owner to fulfil their obligation to protect a listed building? Why is there to be no oversight or independent supervision of the dismantling of the fabric and its reinstatement?

Most critically, if a listed building such as this can become ‘too far gone’ and then be demolished, does the protection supposedly afforded by Historic England’s listing status mean anything anymore?

In 2020, we saw the demolition of three Regency cottages of 1828-31 beside the Regent’s Canal and the Art Deco Rex Cinema of 1938 in Bethnal Green, described in their planning applications as ‘retention.’ In fact, the cottages have been newly built back in enlarged, altered form while the site of the former cinema remains a hole in the ground. It appears that the word ‘retention’ has come to mean its opposite.

Unfortunately this destructive act is not an isolated incident for the owners of the Truman Brewery. They have a disappointing record in stewardship of the historic properties in their possession. This January, when they obtained their permission to demolish the Redchurch St house, marked the anniversary of an earlier act of vandalism – tearing up the ancient cobbled yard at the Truman Brewery within the curtilage of the listed buildings to the east of Brick Lane in 2021.

It comes as no surprise that these are the same people who want to build a shopping mall at the brewery site adjoining Brick Lane with four floors of corporate offices on top, widely believed to be the first step in the redevelopment of the Truman Brewery into a corporate plaza.

You will recall the planning application for the shopping mall and office block was approved by two councillors last year despite more than seven thousand letters of objection. A Judicial Review on the lawful or otherwise nature of this decision takes place at the High Court on June 29th and the Save Brick Lane Coalition has now raised over £23,000 but still needs to find another £17,000 in order to proceed.