Heritage and Civic Pride… Voices From Levelling Up Country: Public First report for HE 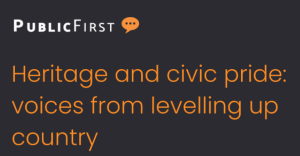 Public First has published a new report for Historic England (HE) on ‘Heritage and Civic Pride: Voices From Levelling Up Country.

Intrigued by a conclusion from our Levelling Up poll last autumn that found that residents rated local heritage more highly than many other aspects of their town as a driver of civic pride, Historic England came to us at the turn of the year and asked us to find out more. And that is exactly what we did through a fascinating focus group study into the views of working class residents in six towns and small cities in the North and West Midlands.

Our project found a strong, palpable, desire to foster a connection with their industrial history. More than that, we found that people instinctively understood that developing that link could play a very important role in rebuilding a distinct sense of civic pride in the places that they live – be it steel in Sheffield, the potteries in Stoke or the railways in Darlington.

But often the people we spoke to worried that this connection was becoming frayed, or had even been cut altogether. They were desperate that that connection be maintained.

“If you go to London and there’s plaques up about different buildings and everything – I think that should be in every town,’ a Darlington childminder told me. ‘We should have a row of houses with a plaque saying, ‘here stands the houses that used to be the houses for the railway workers’, it’s got a bit more sort of oomph to it.”